Making a Crock Pot Ham doesn’t have to be difficult or complicated. In fact, I’m going to show you just how easy it is to make this crock pot brown sugar pineapple ham!  Follow along for step by step directions and tips for picking out the best ham for your family! 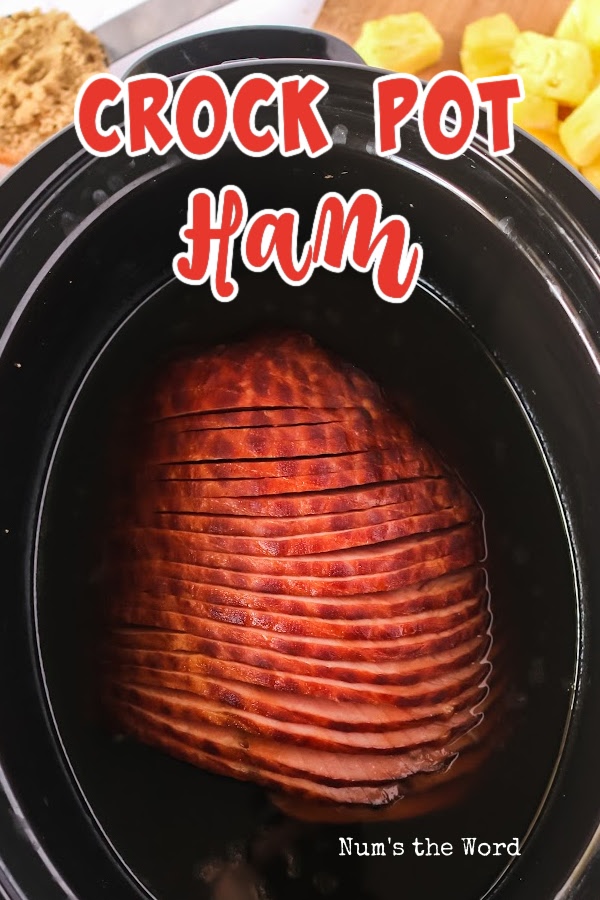 A spiral cut ham is usually cooked – however not always, so be sure to check. If the ham has been cooked beforehand, it will have a “precooked” label somewhere on the packaging.

Precooked hams can come in both boneless and bone-in styles. Bone-in hams tend to taste better, because the bone itself adds extra flavor and moisture to the dish. However some find it more difficult to cut an unsliced ham and prefer to buy a sliced ham.

This is where the spiral cut comes in! This cut is when you slice a bone-in ham in one continuous spiral. These cuts are typically made by a machine at the processing plant or by a butcher, though you can choose to cut it yourself if you know how.

For this brown sugar ham recipe, though, I went with a boneless spiral cut ham. 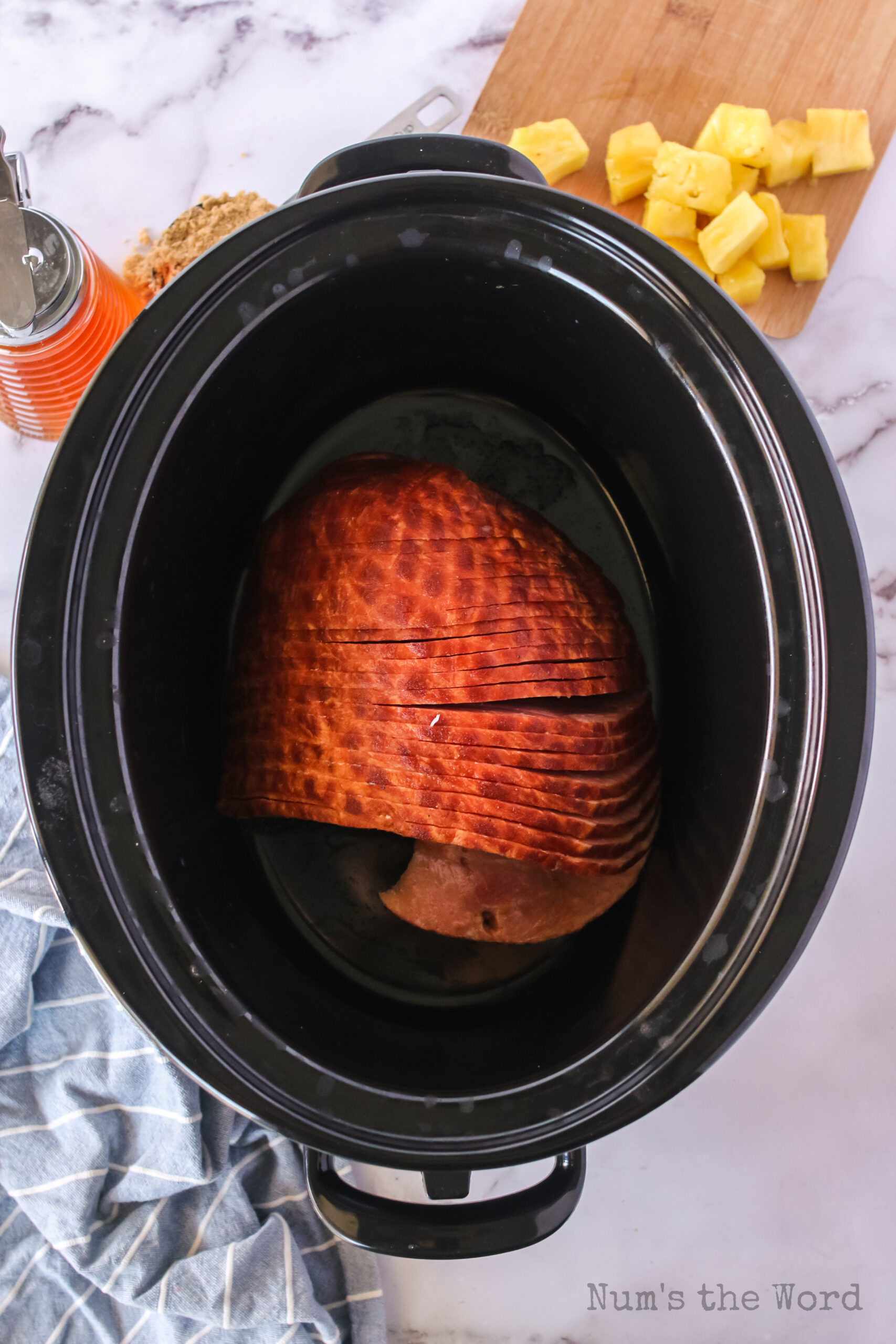 Do You Have to Cook a Precooked Ham?

Nope.  In fact, most ham sold in the united states is pre cooked or smoked before being sold.  Let’s be honest, who doesn’t love a leftover cold ham sandwich? However if you want your precooked ham to have that pineapple ham glaze, then you definitely want to cook it!

Most large hams are cooked again once brought home with a lovely crust or glaze added.  Don’t worry, cooking a precooked ham will not dry it out. All you’re doing is adding flavor to an otherwise plain tasting meat.

Buying an uncooked ham isn’t very common.  But in case you do find one and buy it, you’ll want to cook it until the internal temperature of a digital thermometer reaches 165*F.  Once that temperature is reached, your ham is fully cooked and ready to be enjoyed! Just remember to include a yummy ham glaze like this recipe before you cook the ham.

If you’re cooking a precooked ham with a glaze, you’ll want to heat it up until the internal temperature reaches 145* F.  Once your ham reaches that temperature, your glaze should be perfect and ham flavorful!

Uncooked hams need to be cooked to a minimum internal temperature of 145 ̊ Fahrenheit. 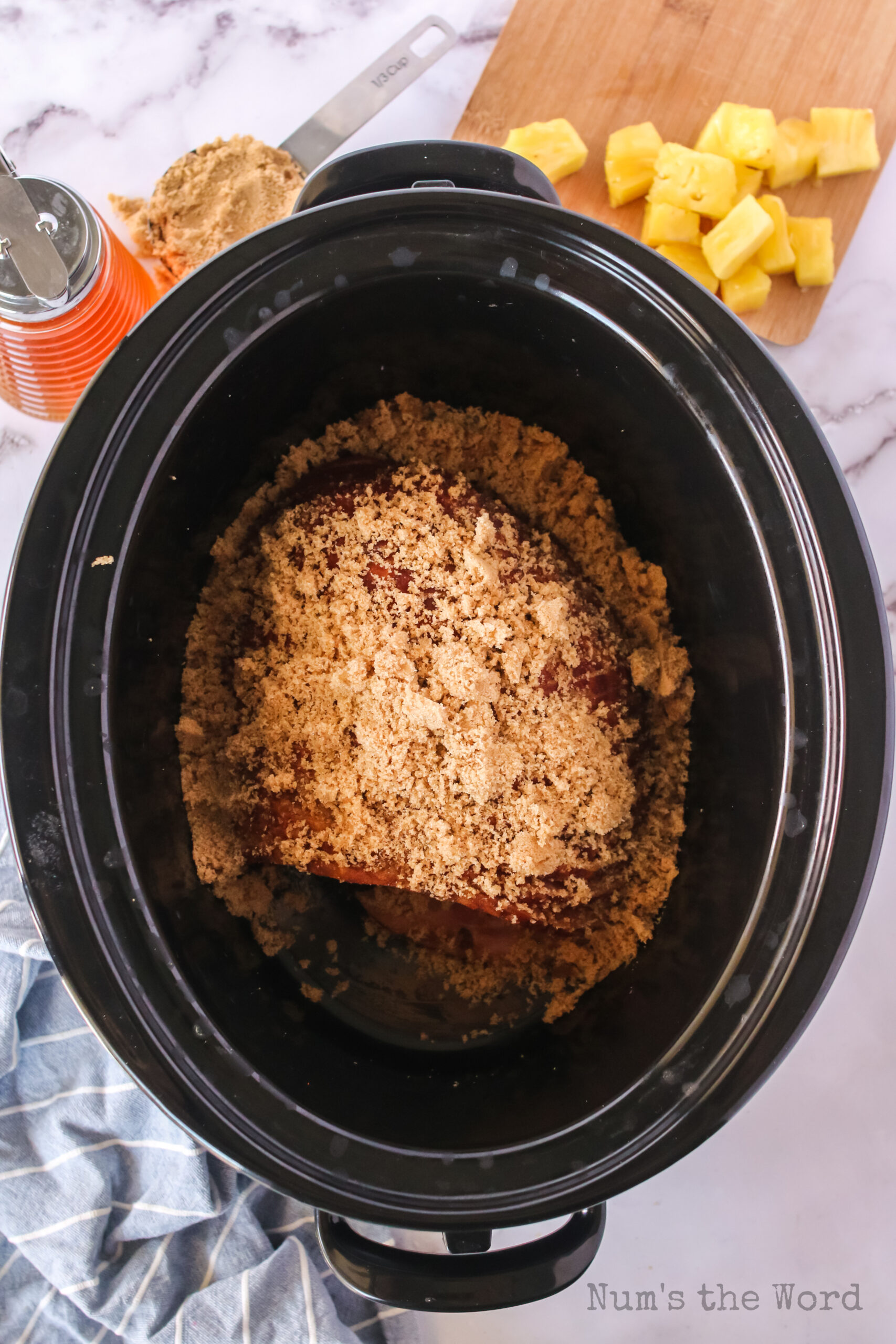 What kind of ham should I buy?

There are 5 choices when it comes to buying a ham.  The brand and particular seasoning packet or glaze that comes with the ham aren’t important as we are making our own glaze.  However you do need to decide from the following choices: 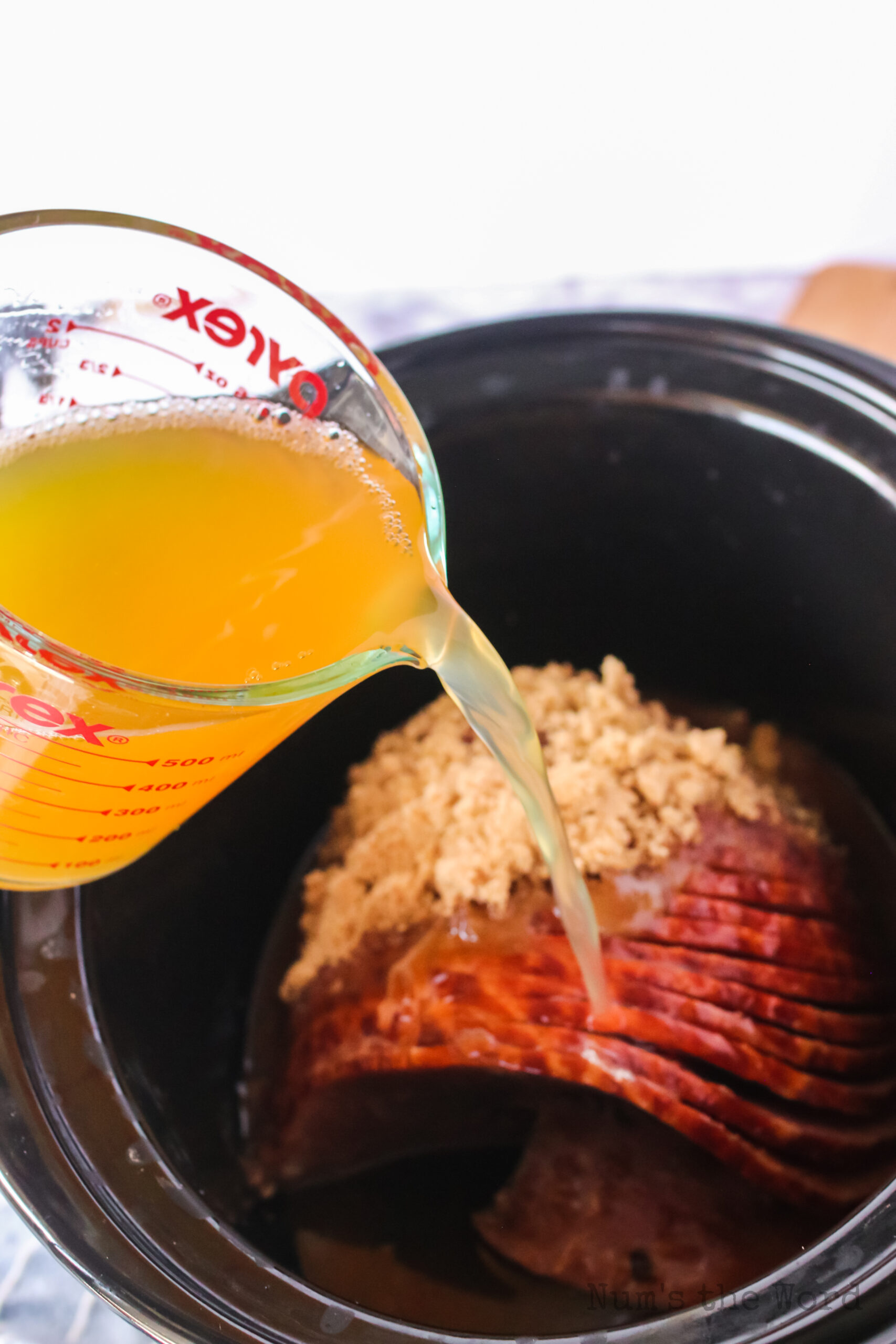 How to make an easy brown sugar glaze for ham?

In order to make your easy ham glaze, let’s break down each ingredient you’ll need! 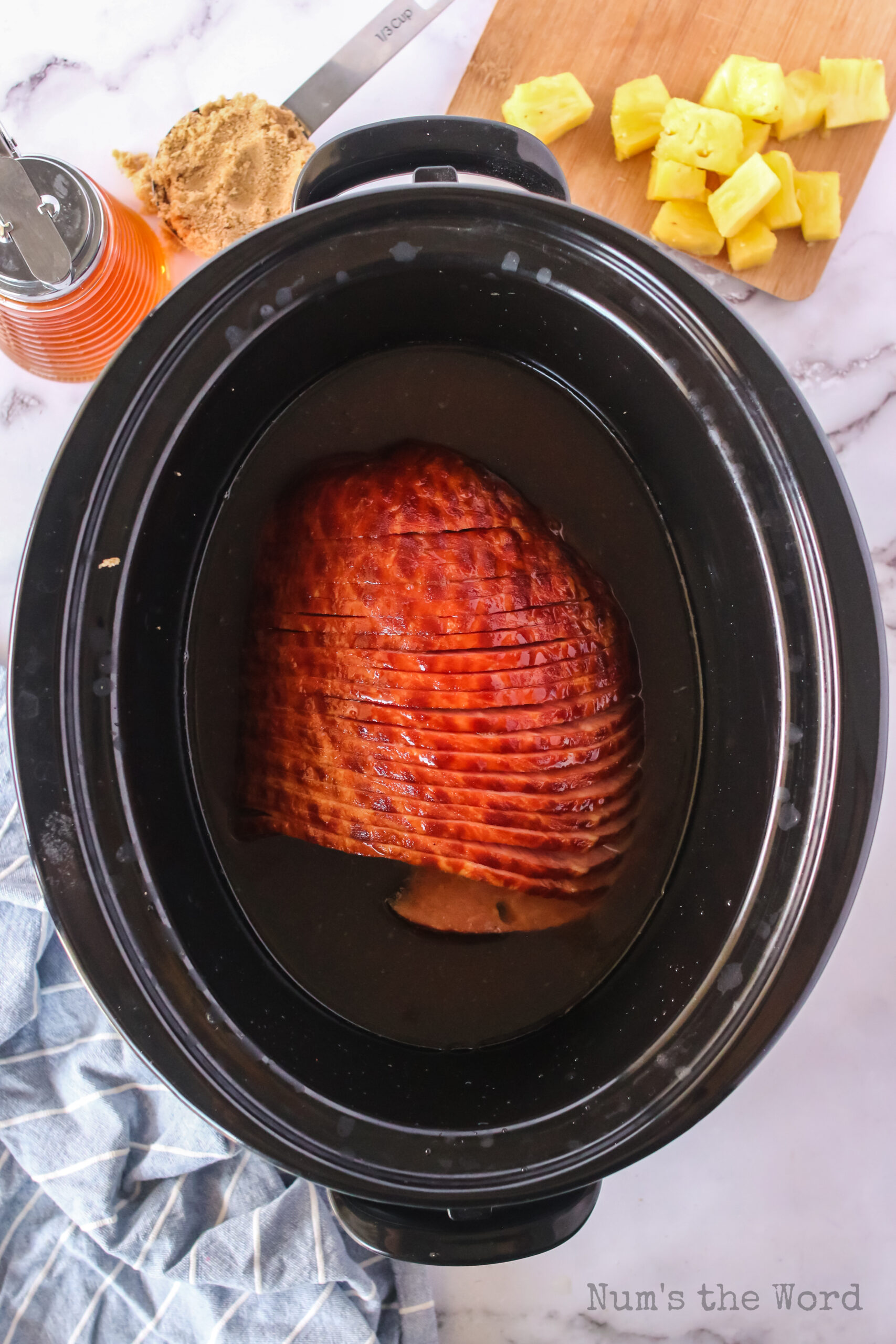 How to cook a fully cooked ham in a crockpot?

Cooking up the BEST spiral ham in crock pot is easy.  So easy it’s difficult to mess this recipe up! Trust me, this is the perfect recipe for a first time cook to make! 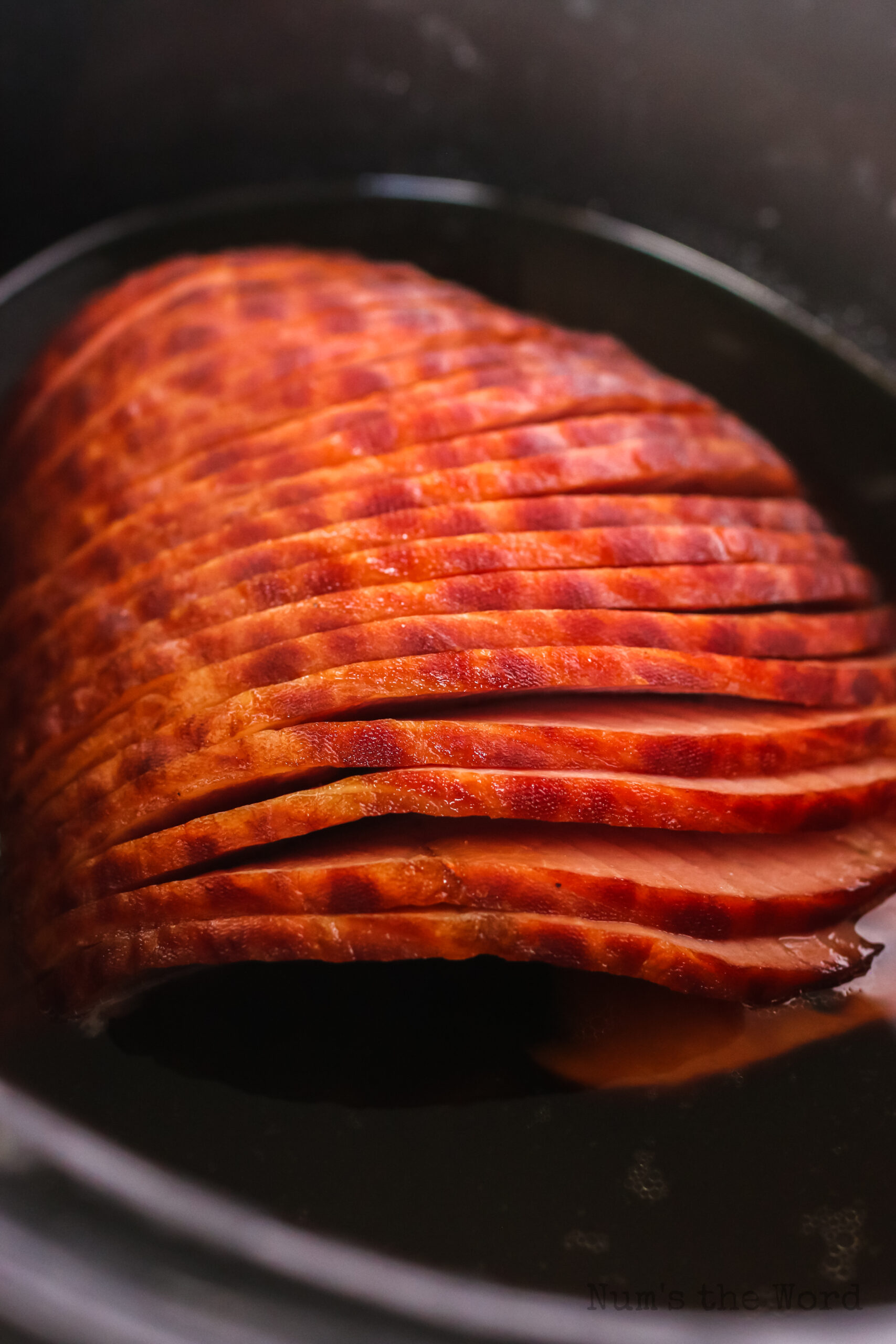 What size of ham should I buy for this crockpot ham recipe?

Pro Tip:  Buy an extra ⅓ – ½ pound per person so you have leftovers! 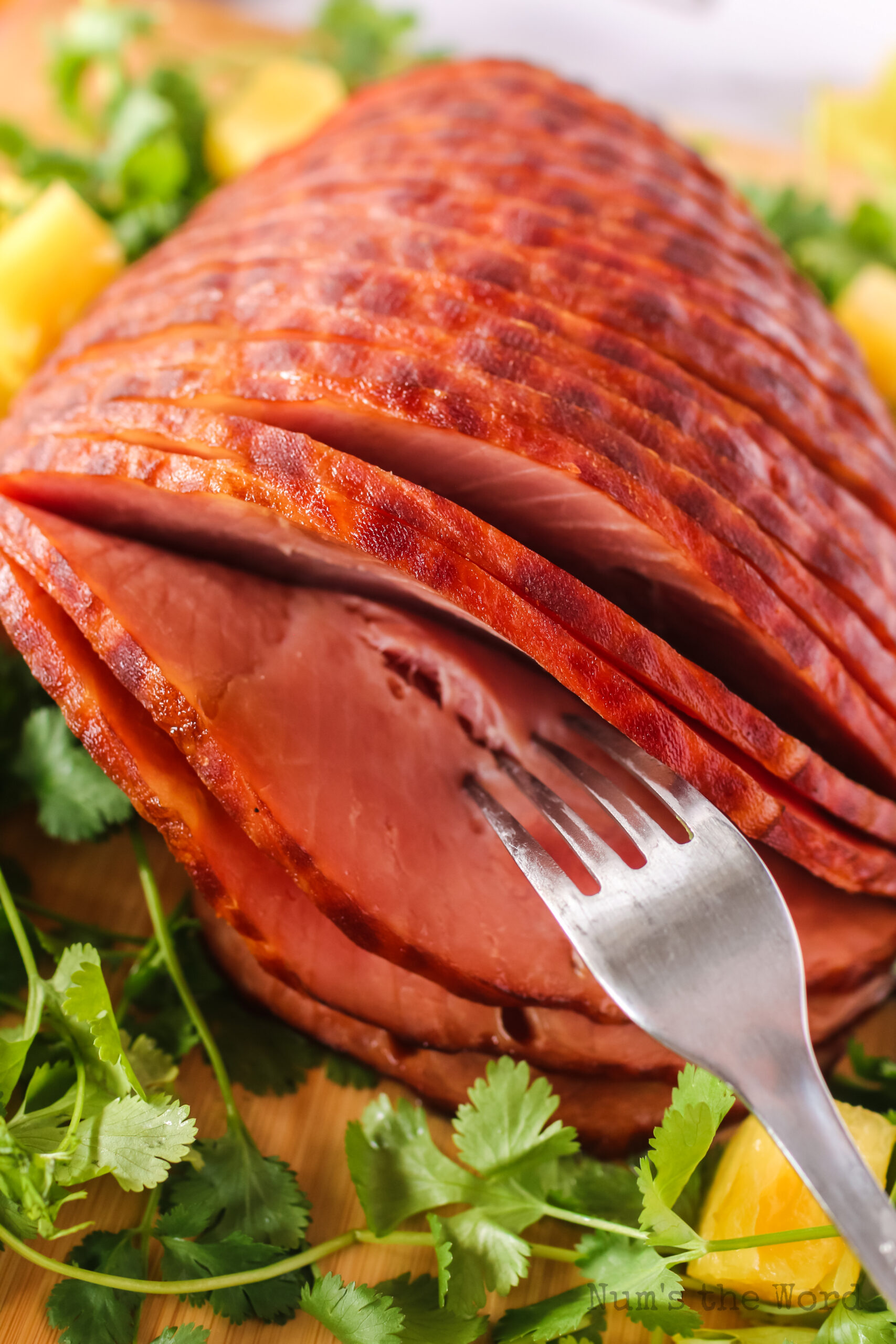 What side dishes to serve with ham? 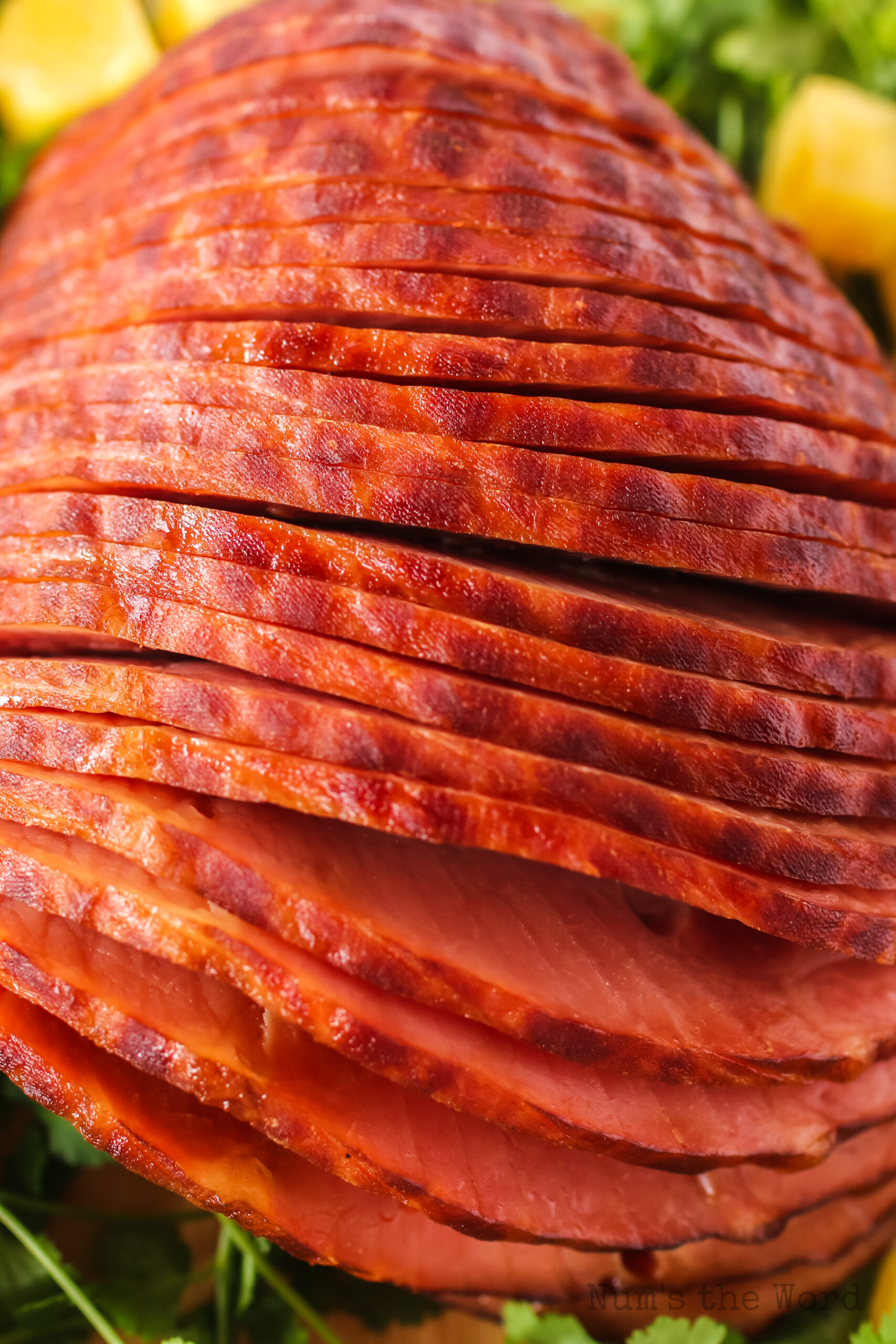 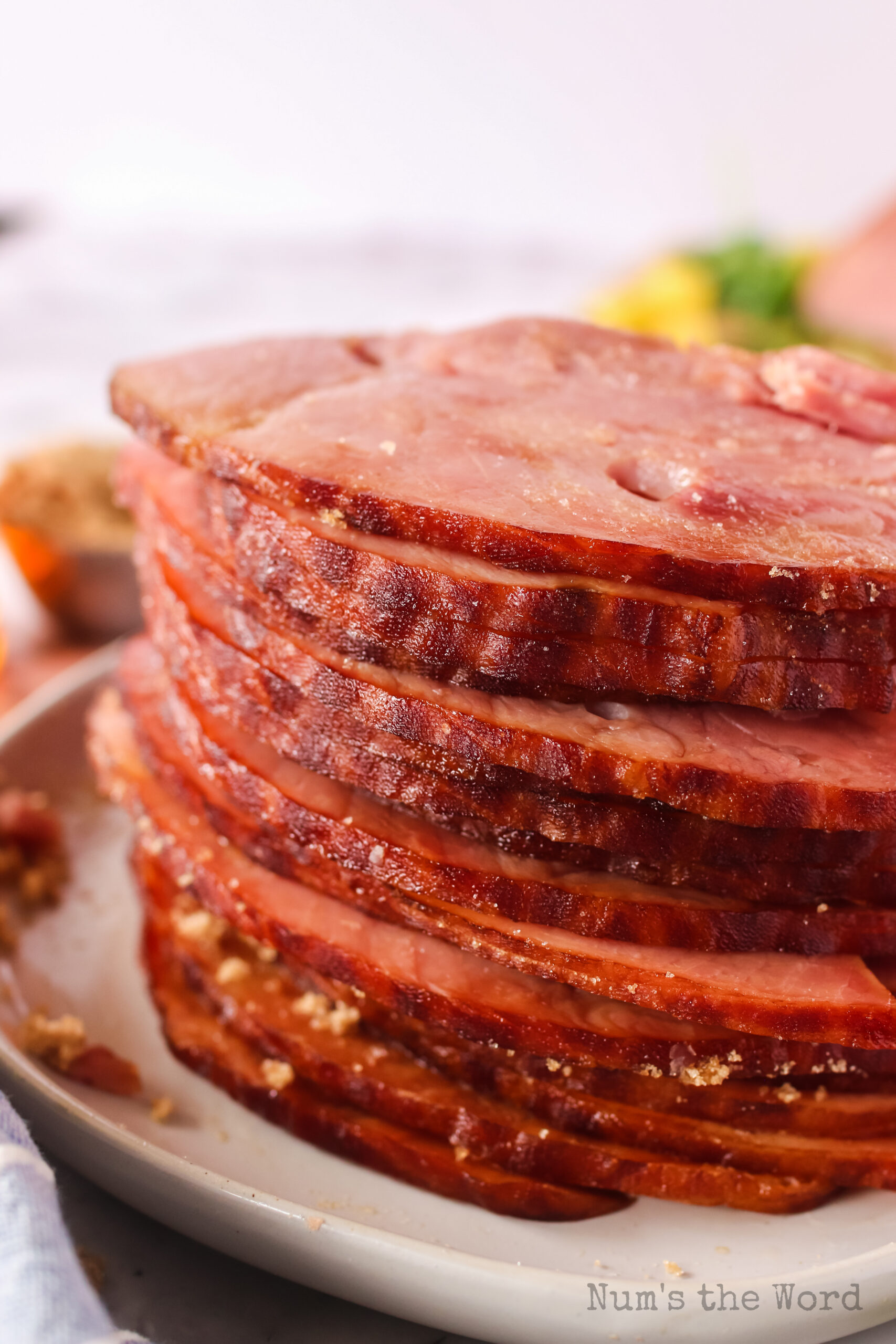 This Brown Sugar Ham has become a family favorite recipe!  Try it this year for Thanksgiving, Christmas for Easter and you’ll see just why it’s requested!

Mmm, this looks so delicious. Perfect for the holidays!

Does the ham have to be spiral?

No! It's just my favorite for ease of serving. You can buy a non spiral cut ham and diamond cut it instead. :)

Sounds delic! Is there a way to do this in the oven by chance??

Katrina! Yes! Place your ham in a large deep baking dish. Heat oven to 325*F and cook for 1 hour 15 minutes - 2 hours depending on size. 5 pound ham should cook in 1 hour 15 minutes. Baste every 20 minutes to ensure maximum flavor. We also have a Honey Baked Ham (oven) recipe here on the site too! You'll have to check that one out! I hope you enjoy it!

Made this and my husband loved!! Going to make for Christmas. How much would a 7-8 lb ham feed?

Is spiral cut ham precooked? Looking forward to making this!

Thanks for stopping by Diana! The ham that I used was NOT precooked - or at least the packaging did not tell me it was. By slow cooking it long term, it allowed the flavors to fully soak into the meat and give it a yummy flavor! Hope this helps!