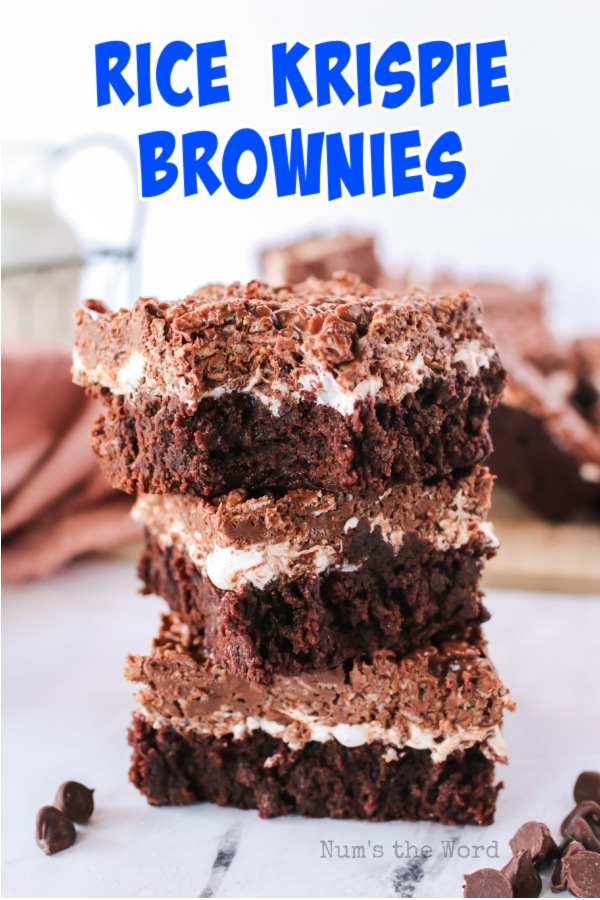 We like to call these triple layer brownies. WOAH. When I first heard of rice krispie brownies I was dumbfounded. People put those together?

After I made them all I could think was, WHY don’t more people put these together? Holy Moly!!

I love how fancy crunchy brownies are. They are so unique that every time I bring them to an event, everyone wants to try one.

Rice krispie brownies are made from pantry ingredients which can be bought from any grocery store. No crazy ingredients. 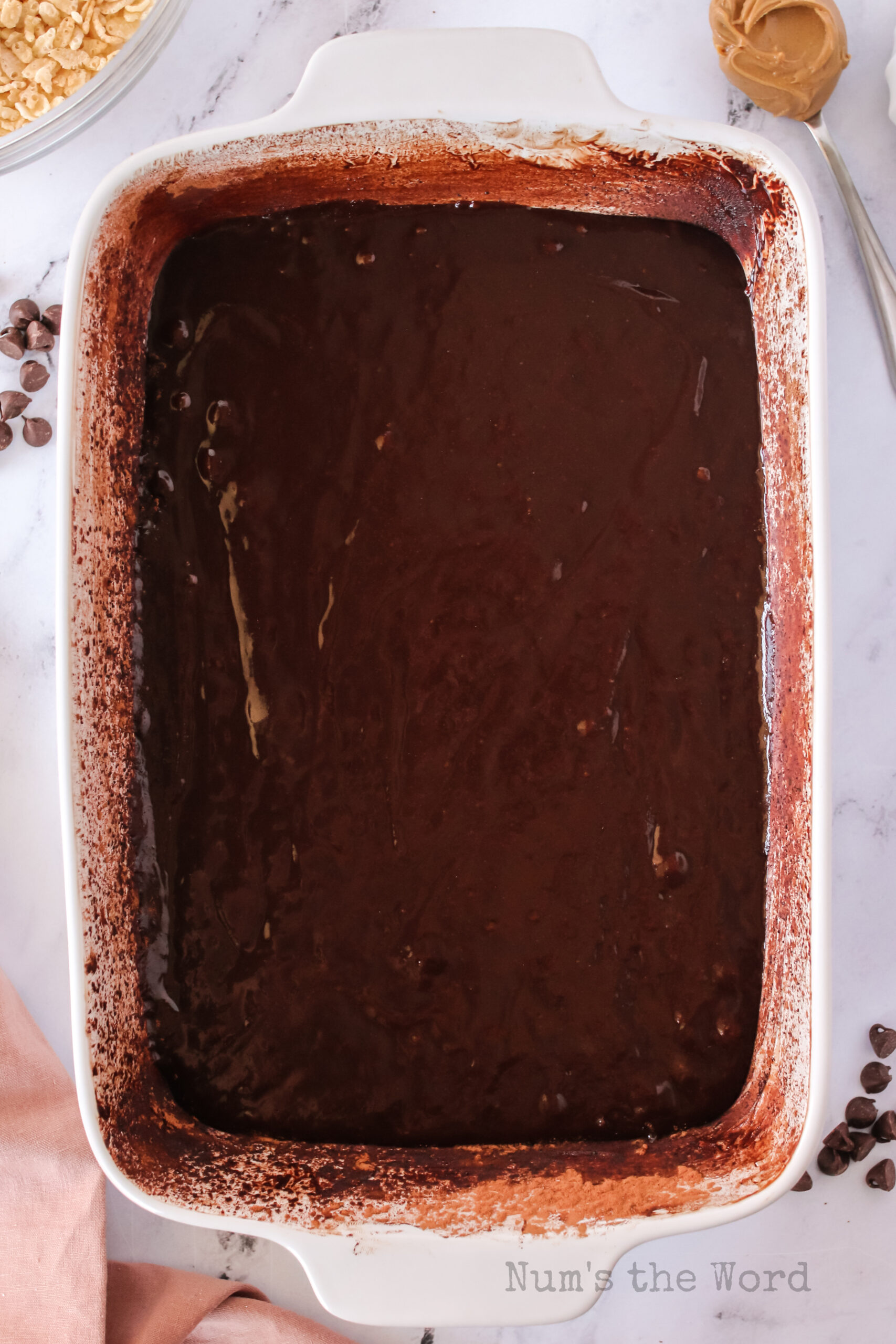 What Is a Brownie?

A brownie is a chocolate, cake like dessert that can be cakey or fudgy in texture. They are typically eaten out of hand though so not as light as a real cake.

Brownies can be served with lots of mix-ins like nuts or chocolate chips. They also occasionally include toppings like frosting or cream cheese.

In this recipe, the brownies do not have mix-ins but toppings like marshmallow creme and crunchy rice krispies. 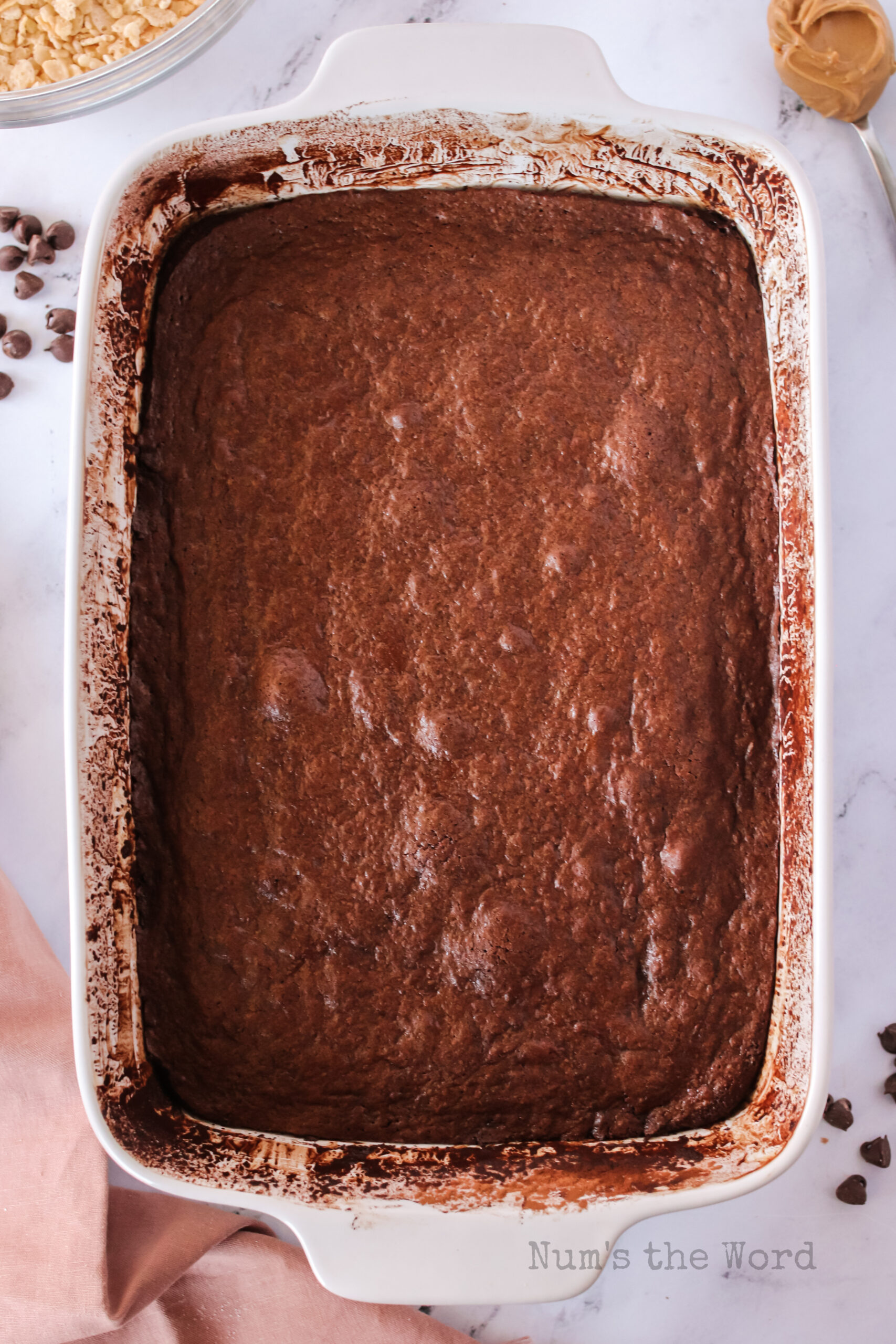 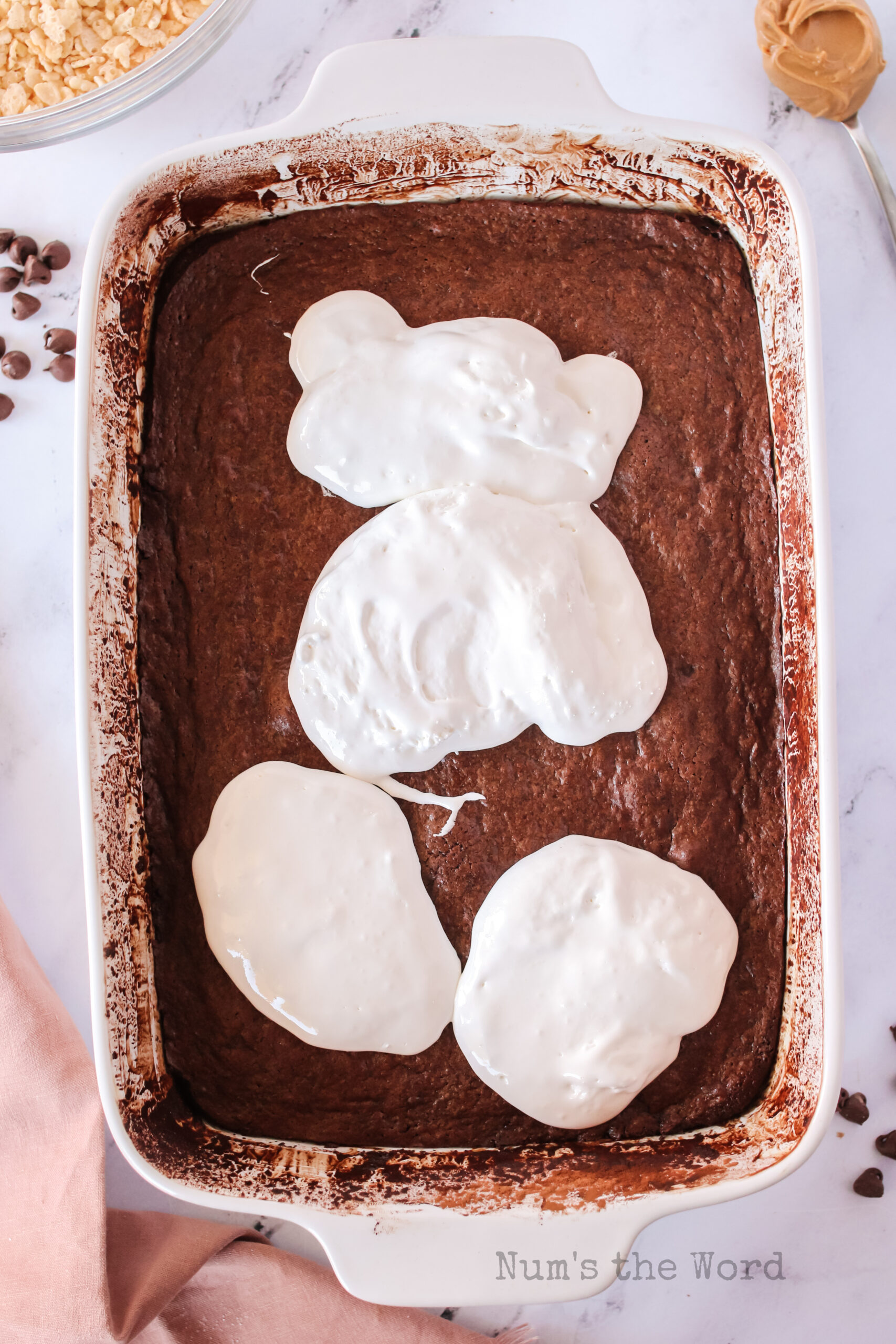 How to Make Rice Krispie Brownies 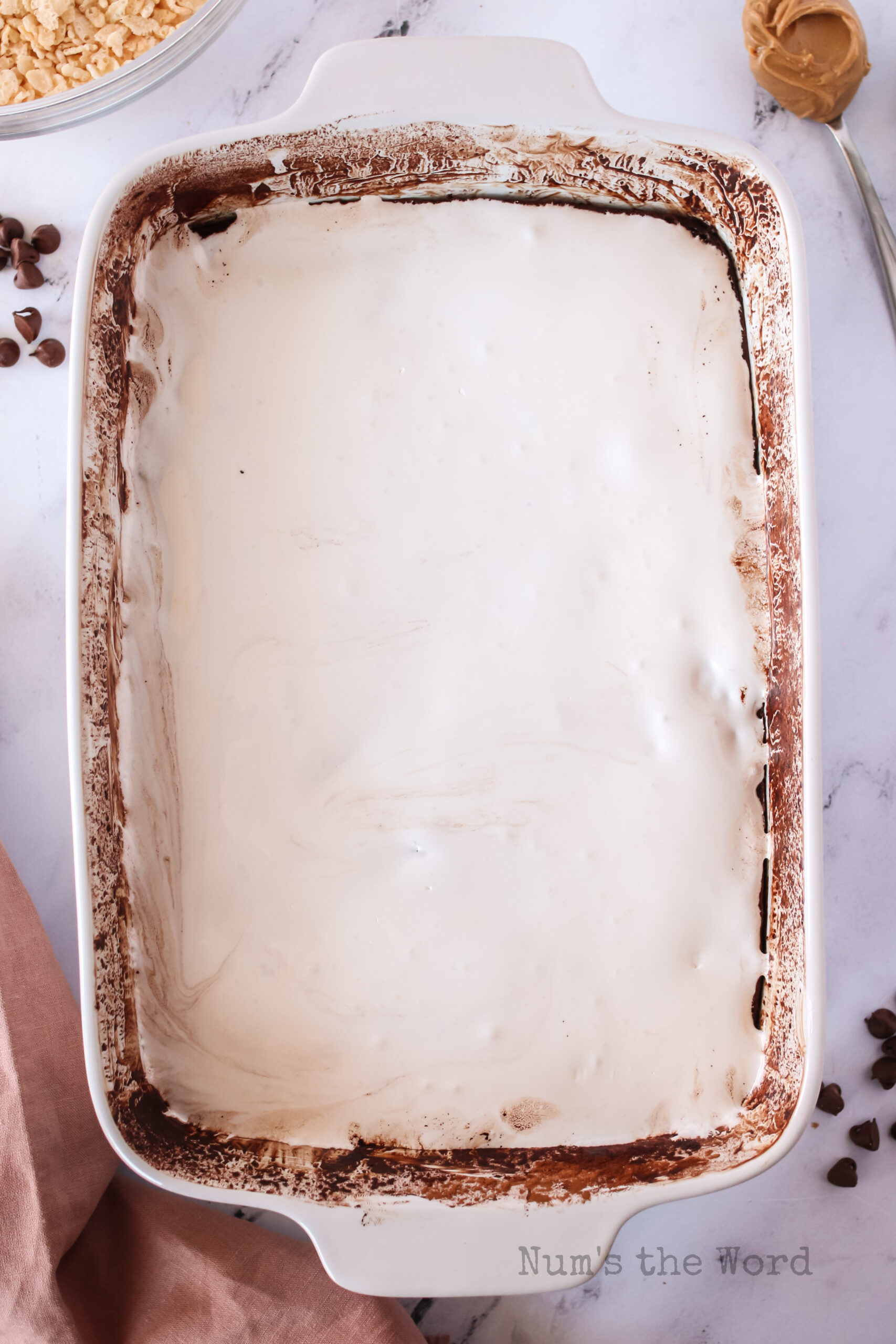 How Long to Let Brownies Cool

Once the entire dish of rice krispie brownies is put together, it should be cooled completely before cutting into it.

If you try cutting while it’s still warm the layers will melt into each other. It’ll still be delicious but not nearly as nice looking. 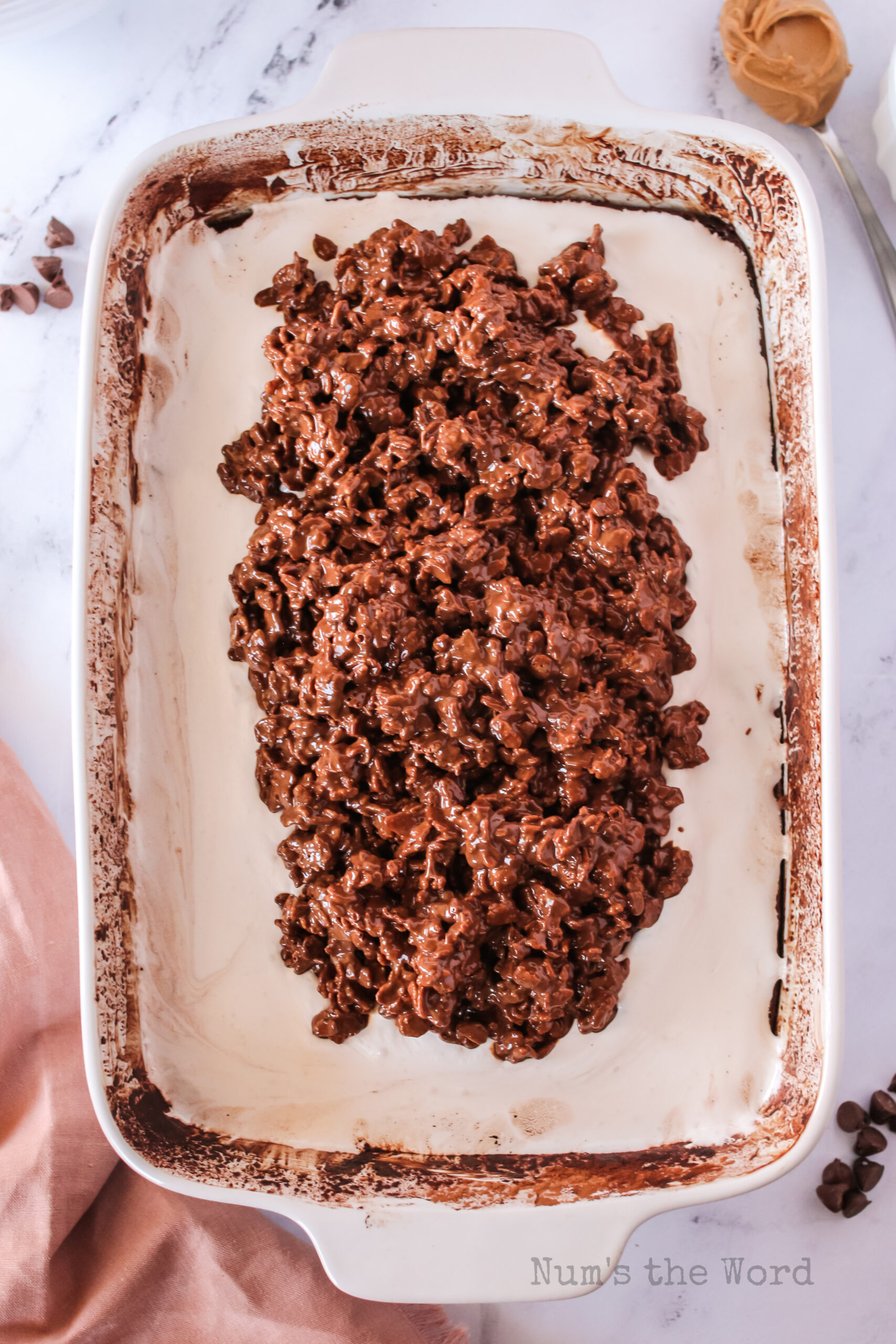 Properly stored in an airtight container or wrapped, the brownies will stay good for 5-7 days.

Of course 24 hours is about all they ever last in my house before someone asks where they went… in my belly! 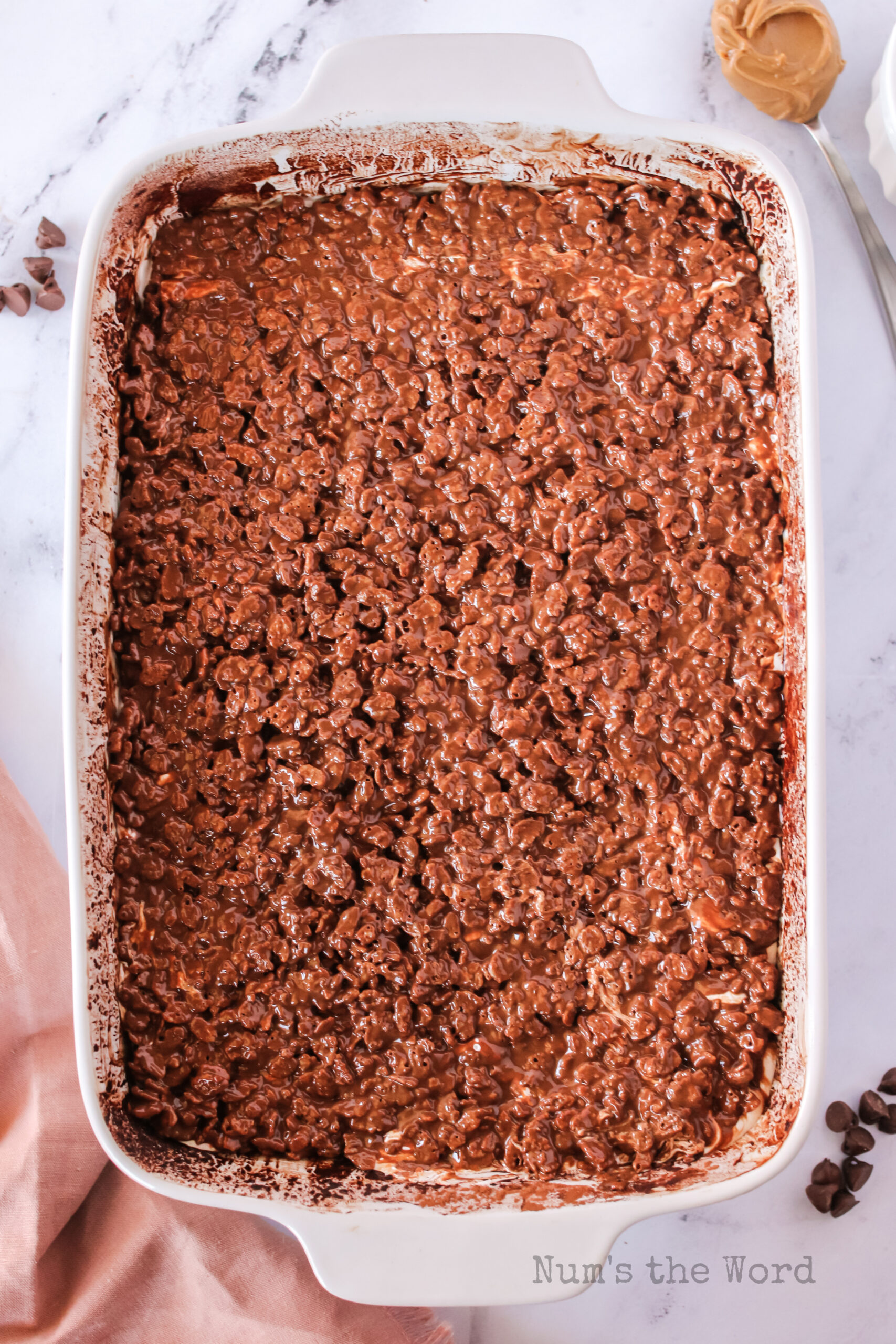 Can You Freeze Rice Krispie Brownies?

Freezing is one of my favorite options as it allows me to hide the brownies.

Then when I’m having one of those days… you know the one… crispy brownies to the rescue! 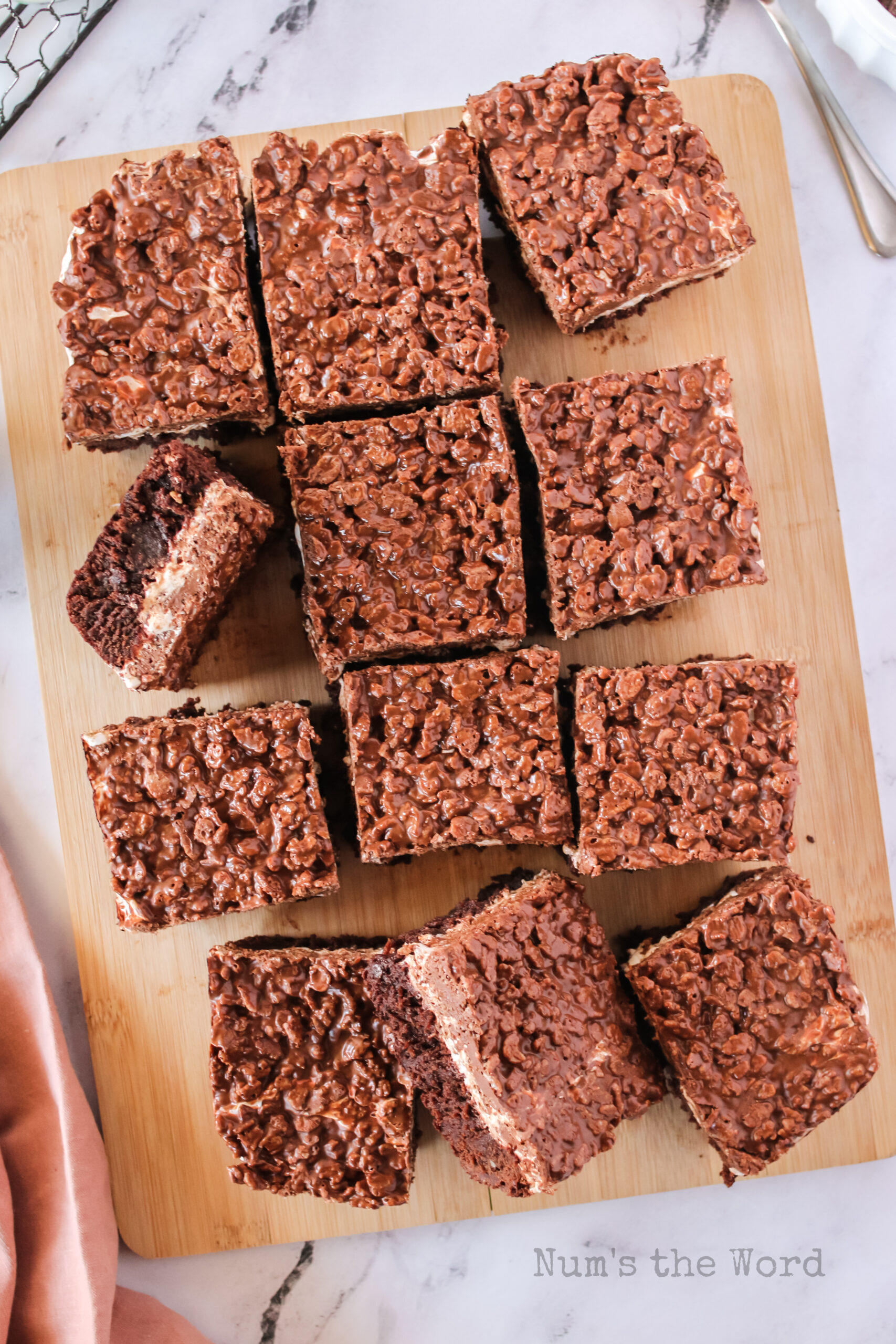 How to Cut Brownies

Since these brownies will be cooled completely, they’ll be very easy to cut and you won’t have to worry about ripping them apart.

I like to make two cuts down the length of the pan and three cuts down the width. That’ll give you 12 large rice krispie brownies.

You can make more cuts to make smaller brownies and more servings. I wouldn’t do less cuts or the brownies will be way too large to serve.

Pro Tip:  To make even easier to cut, chill the brownies first.  Then slicing through the marshmallow layer is a piece of cake!  Cut up, these will warm up to room temperature fairly quickly! 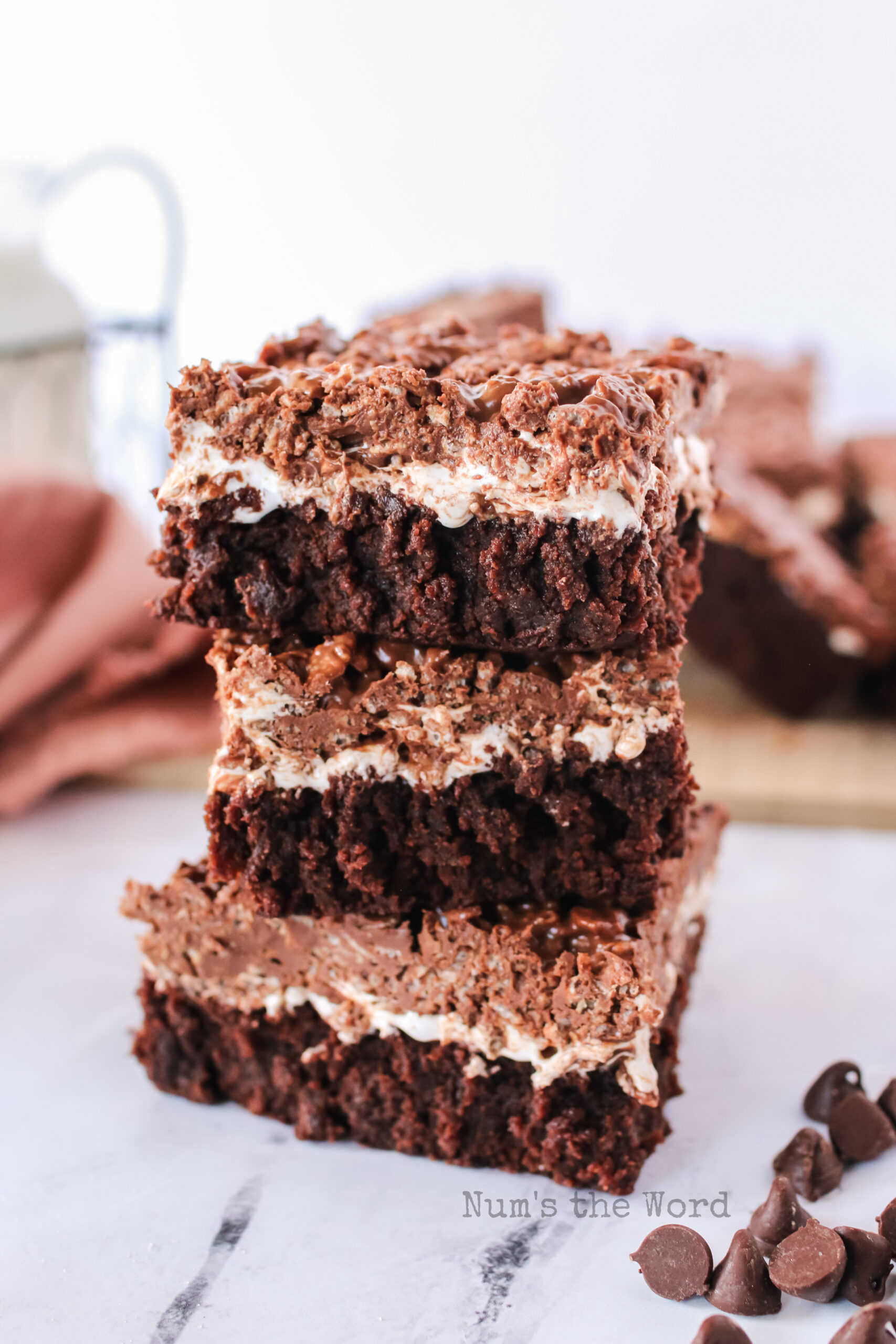 Don’t you just love the person who invented brownies? I know I’m grateful all the time for the people who made different desserts.

Brownies were first coined in a cookbook in 1896 by a woman named Fanny Farmer.

Though she made what we would call Blondies really, which are brownies with no chocolate.

10 years later, Fanny Farmer updated her cookbook with two recipes. Each of them were called brownies.

One had chocolate and the other didn’t. Though both I’m sure were delicious.

Thank you Fanny Farmer! Love me some brownies! 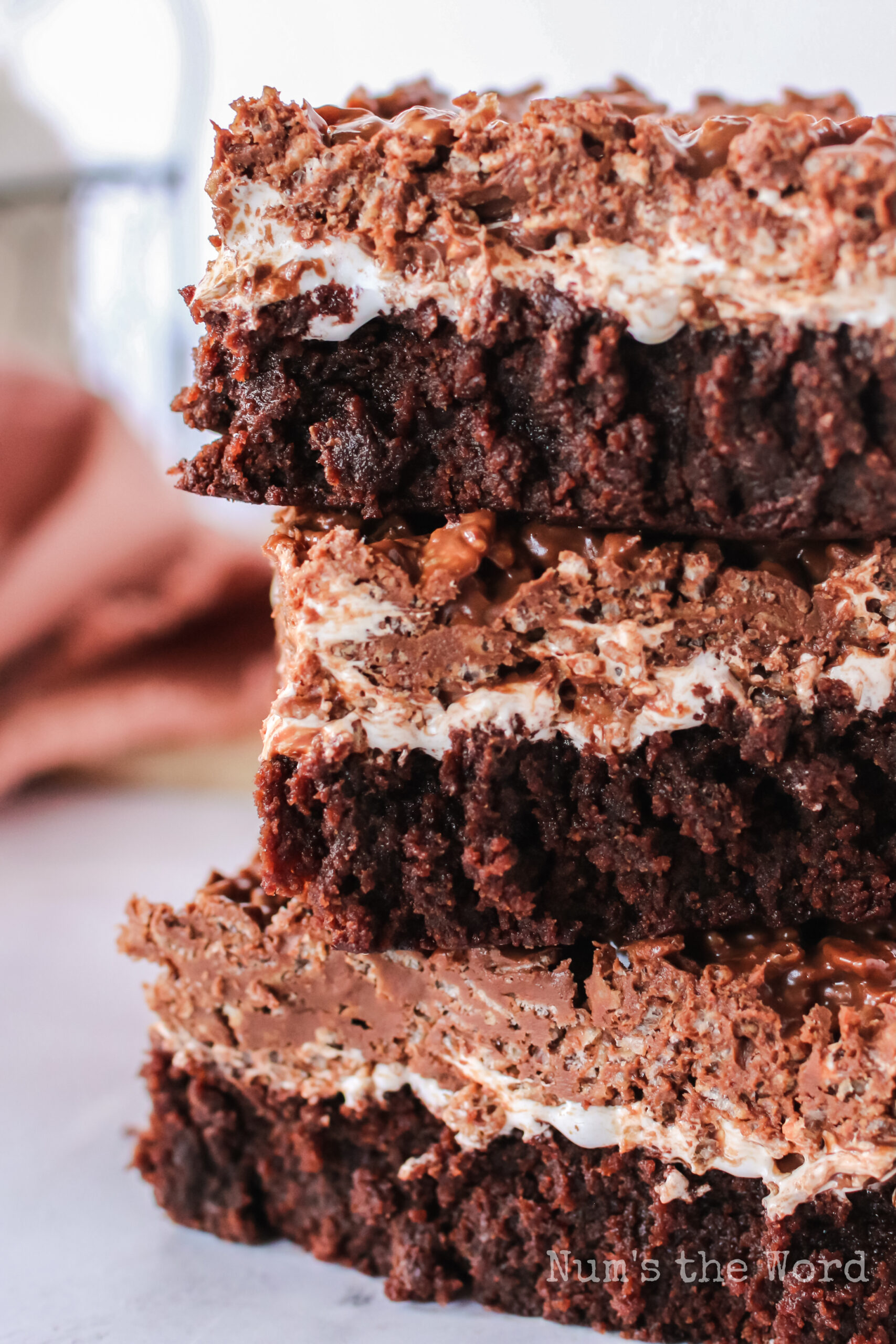 Yes and no. Brownies should not puff up like cake. They are meant to be heavier and fudgier.

That said, the baking powder and eggs will help the brownies to rise a little bit to be the right consistency for brownies. 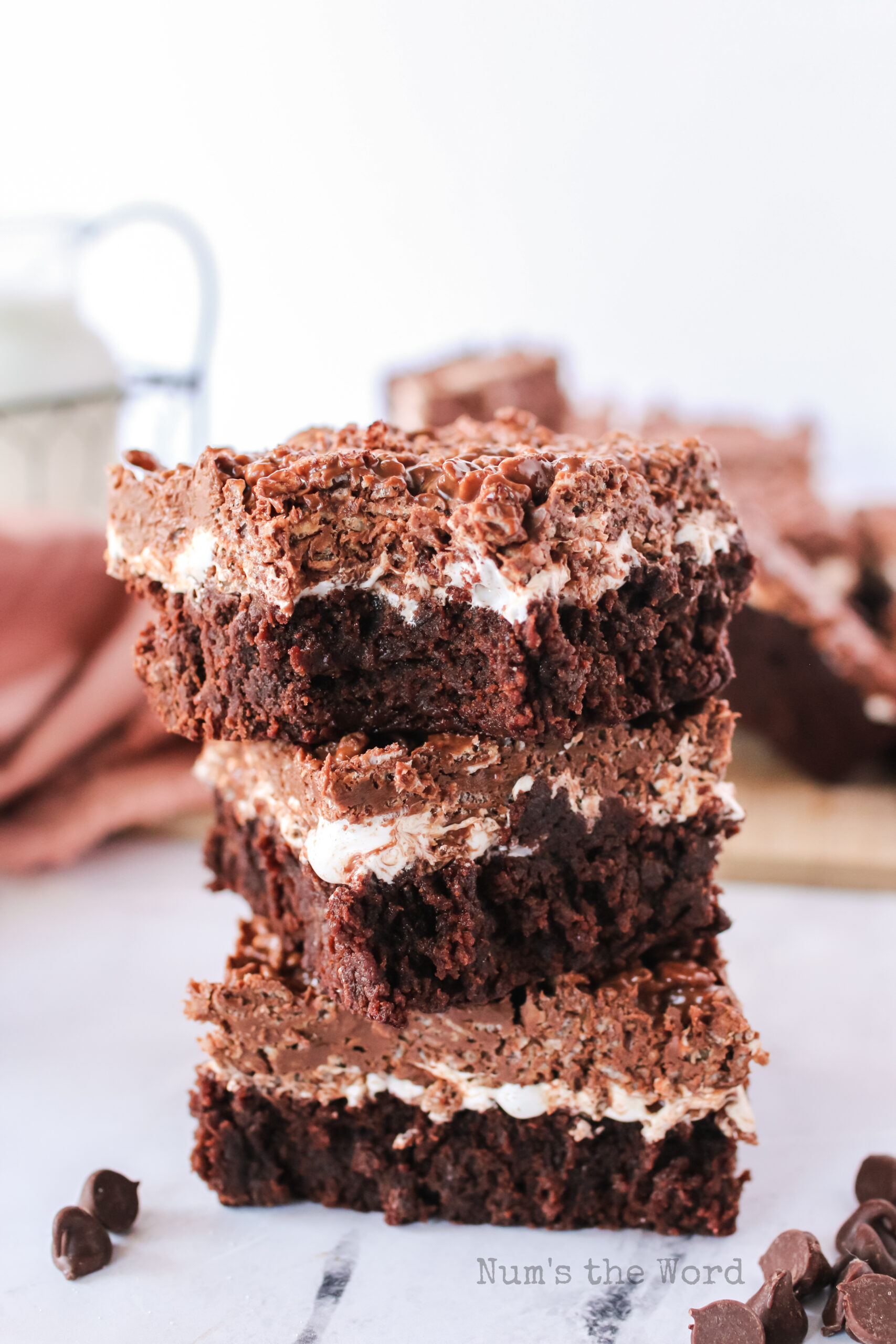 Rice Krispie Brownies are an absolute delight to eat. Fudgy, chocolaty, and peanut buttery. Oh my goodness. Soft, creamy, and crunchy too, I know you’re going to love them.

These brownies are awesome! Thanks for sharing this yummy recipe!

How much chocolate chips for the rice Krispy layer?

Mikaela that is an excellent question! So glad you pointed that out. It's 1 cup semi-sweet chocolate chips. I've updated the recipe card to reflect it. Thank you for pointing it out!