I love a good chilled pie, and nothing complements one better than this delicious Vanilla Wafer Pie Crust recipe! It’s easy to make and works in place of just about any recipe that calls for a graham cracker pie crust. 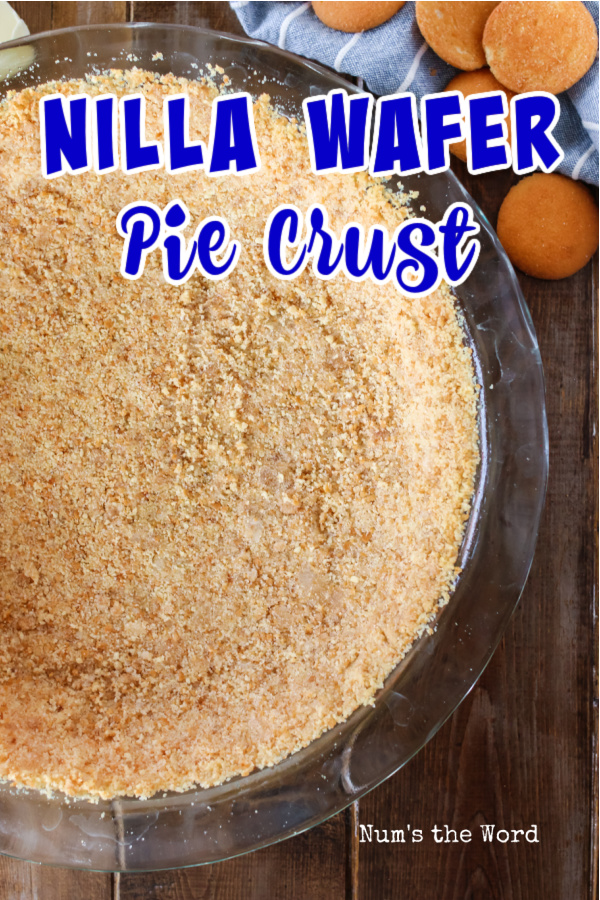 Sometimes the little details have the biggest impact, and that’s no different with this tasty pie crust recipe.

Though it’s very similar to a graham cracker pie crust, the flavor is just different enough to stand out on its own. It’s a subtle twist on a famous favorite!

I especially love to use this recipe with all things banana. Banana cream pie, banana cheesecake — nilla wafers have always gone with banana desserts!

And while this Nilla Wafer Crust is great for more than just banana flavored things, it goes without saying that it’s also perfect WITH all things banana! 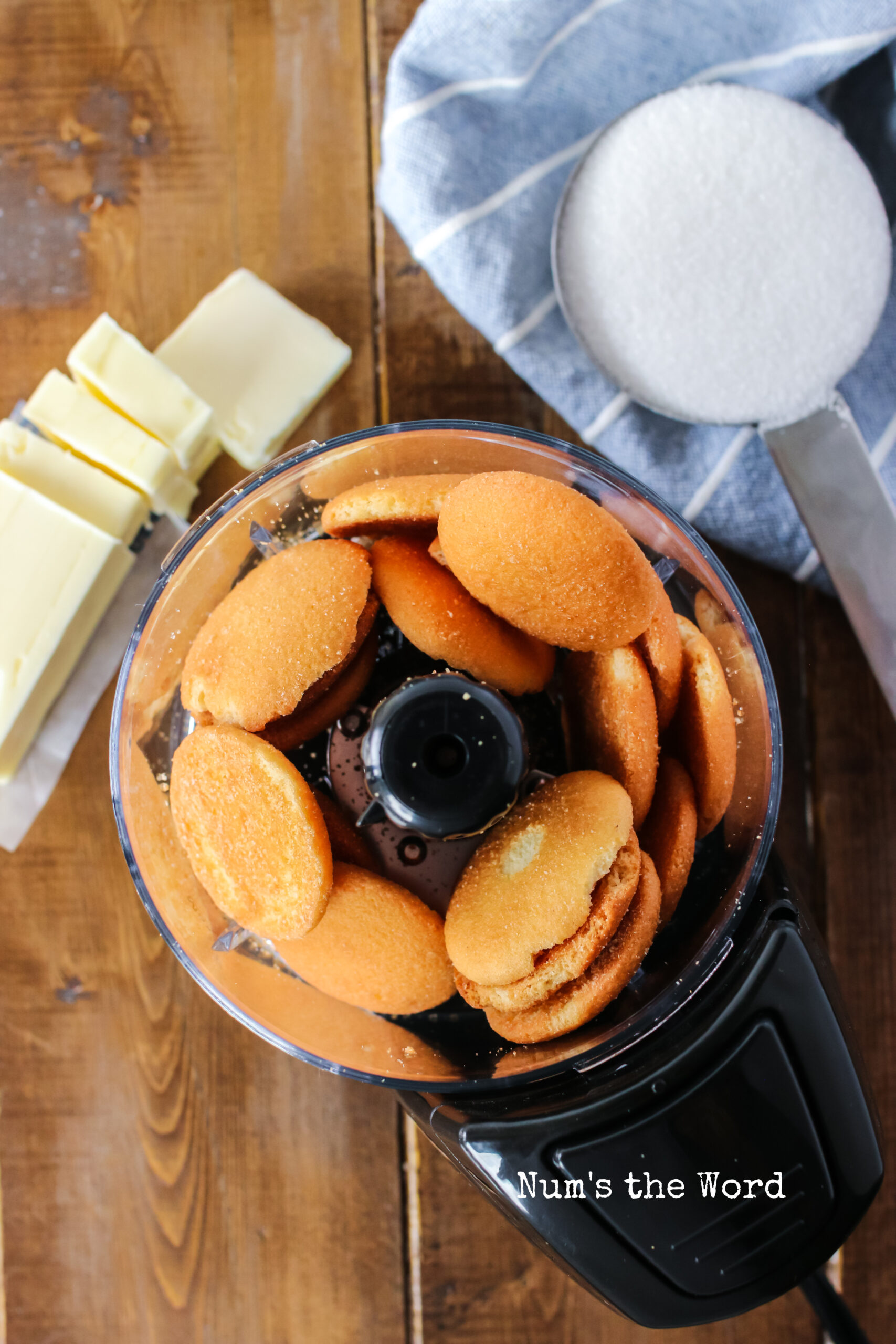 What pie goes well in a Vanilla wafer pie crust?

This vanilla wafer pie crust is very versatile! It goes best with icebox pies (the kind you don’t have to cook), and we have quite a few suggestions, if we do say so ourselves.

My #1 favorite recipe that uses this recipe is No Bake Banana Cream Cheesecake.

Basically, you can use this recipe in place of any that calls for a graham cracker pie crust. Here are some other recommendations that go well with this tasty Vanilla wafer pie crust recipe: 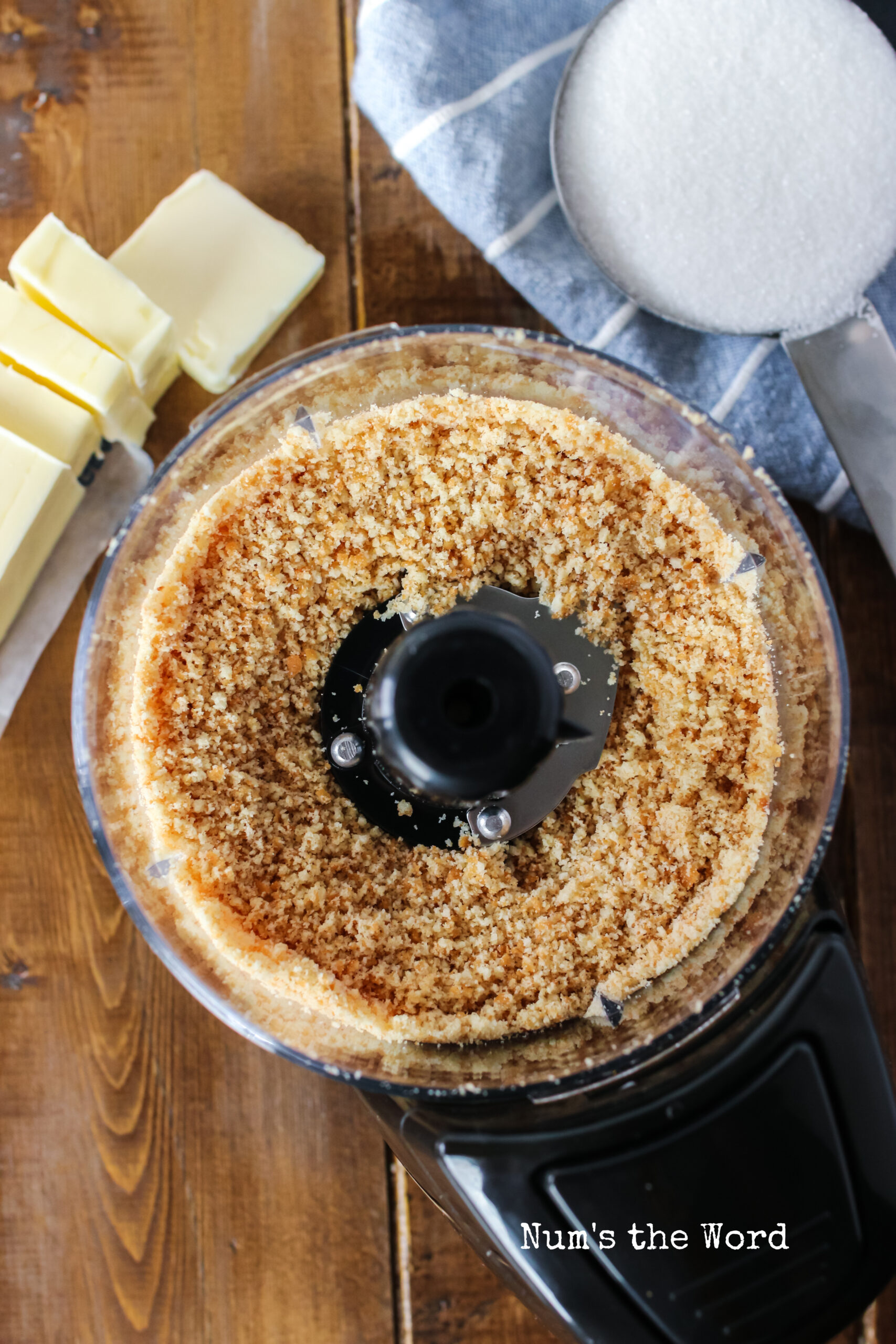 What ingredients are in a Vanilla Wafer pie crust?

I love how quick and easy it is to make this, the BEST vanilla wafer pie crust recipe. It goes so great with so many different fillings! And the ingredients are super simple. Here’s what you’ll need to get started: 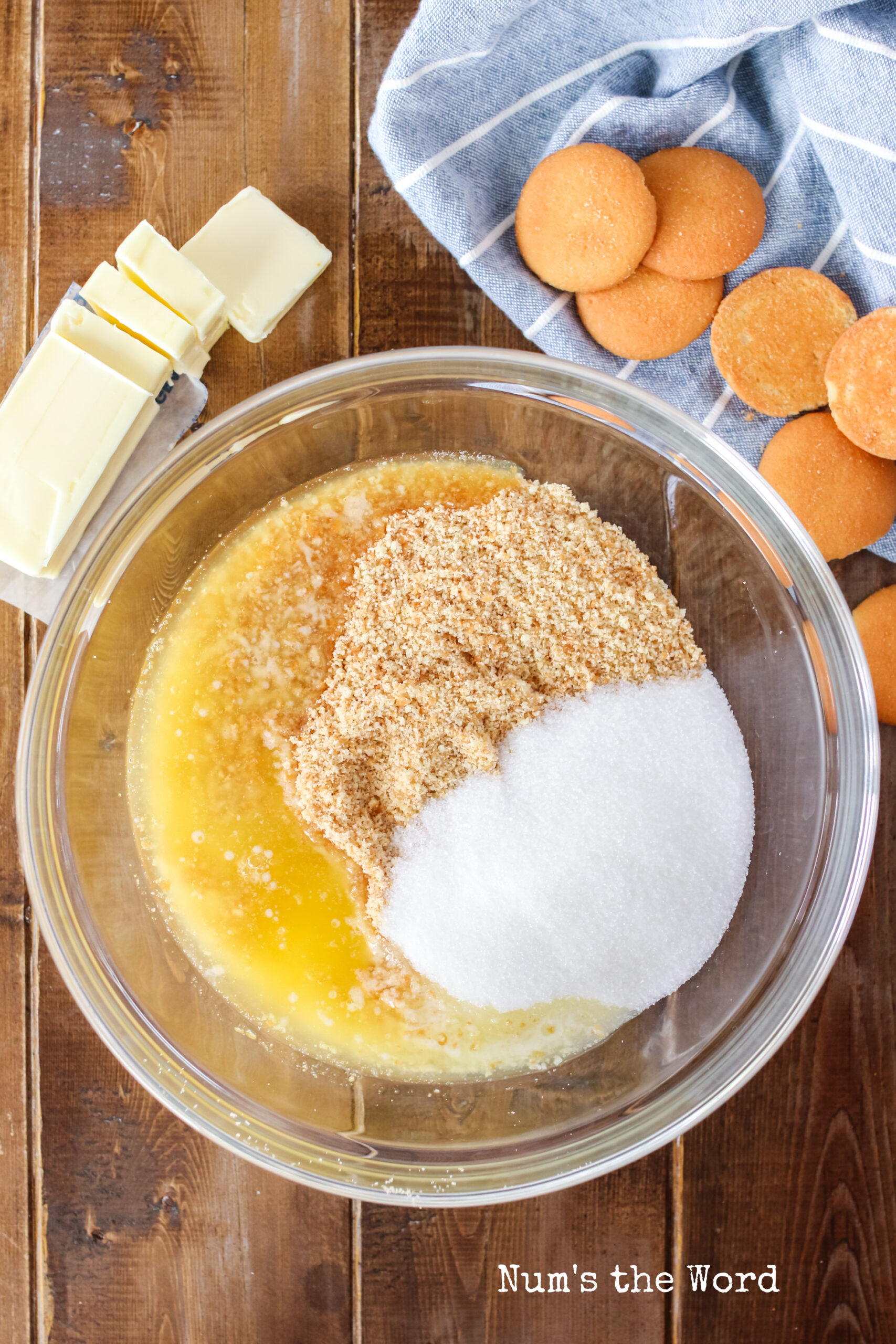 It really is THAT easy to have a delicious and vanilla-y pie crust for your favorite icebox pie filling or no bake cheesecake! 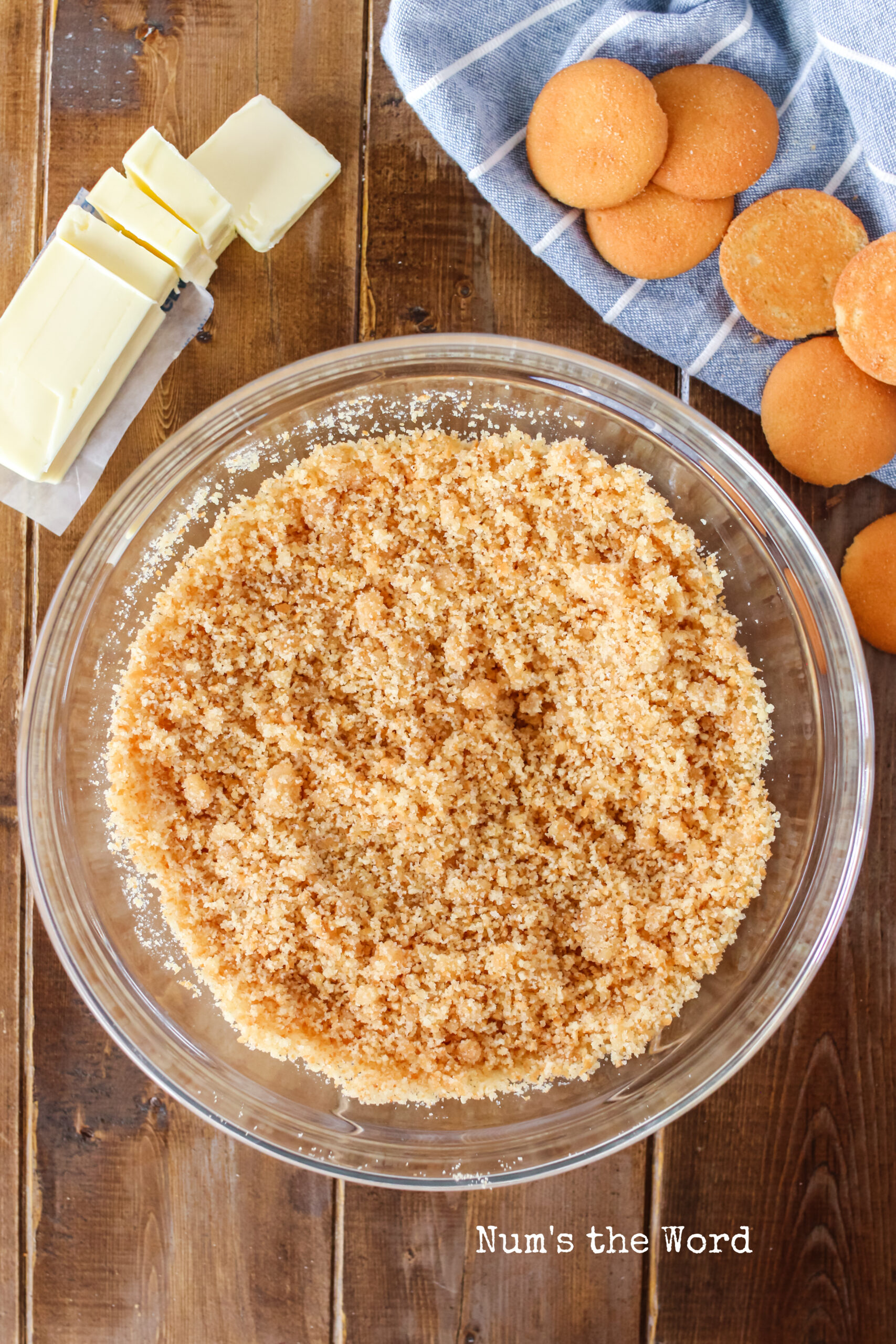 Yes, this pie crust is baked for a little while to get it nice and crisp and to caramelize those sugars. It’s a quick bake time and makes for the perfect textured pie crust to complement your yummy filling!

Can I make vanilla wafer pie crust ahead of time?

Yes, you can definitely make this crust ahead of time!

If you’re just looking for a day or two ahead, you can fully prep this pie crust, cover tightly with saran wrap, and store in the fridge for up to two days before preparing the rest of the pie. 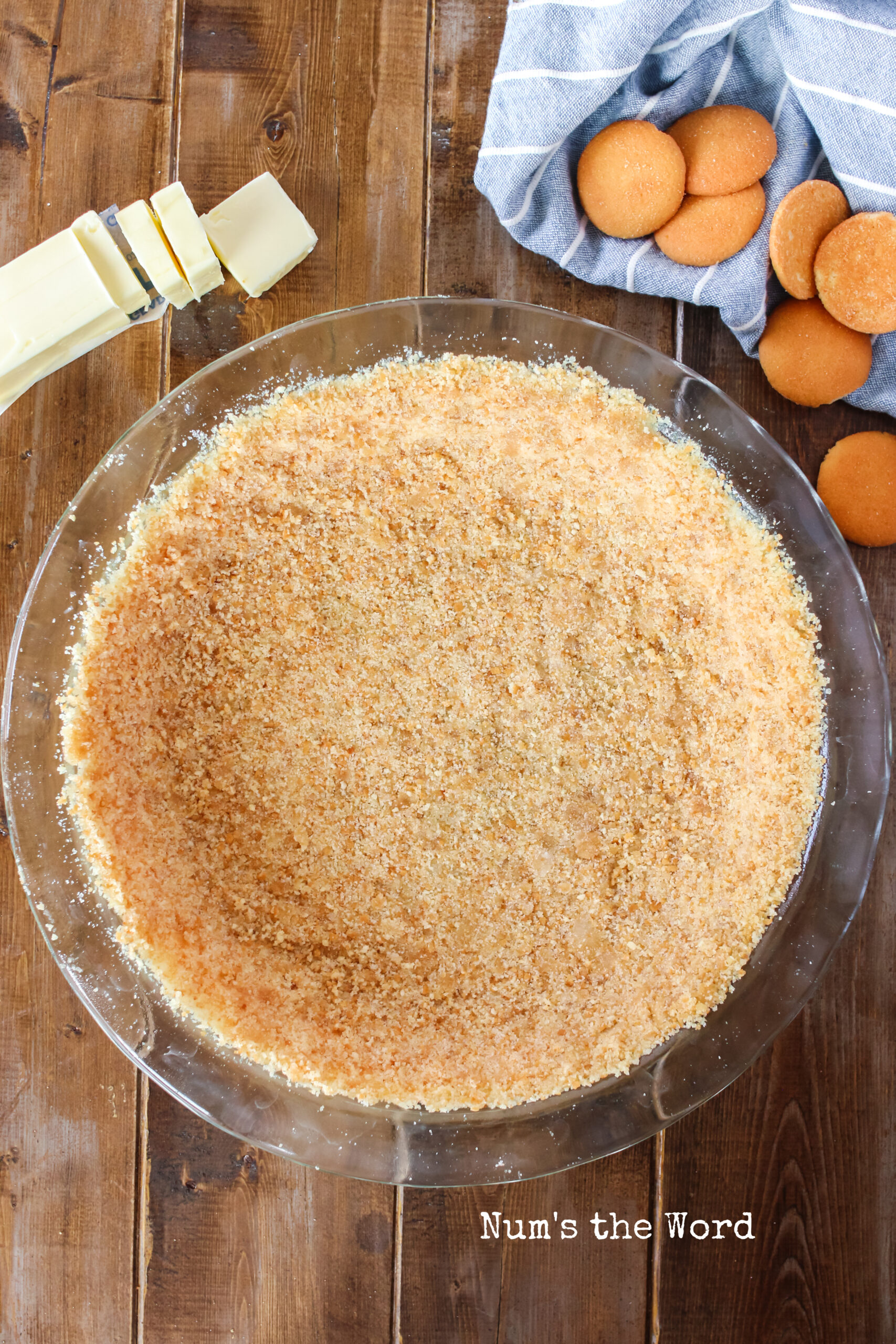 If you’re wanting to freeze the pie crust for 1-2 months, I recommend using a disposable pie tin with a lid. Prepare the pie crust as usual but DO NOT bake it.

Cover the crust with the plastic lid upside down (like the readymade ones you buy at the store) and freeze for up to 2 months. Bake as usual before using.

If you’re making a frozen pie, that’s just fine too! Once fully prepared, this pie crust works great with ice cream pies or other frozen pies.

Can I make mini pie crusts using this recipe?

If you’re wanting to make mini nilla wafer pie crusts, this recipe works great for that as well! Simply press the pie crust mixture into muffin tins or mini pie pans and prepare as usual.

You’ll want to keep a close eye as they bake so they don’t get overcooked. Usually smaller crusts cook faster. The pie crusts should be the slightest golden brown. 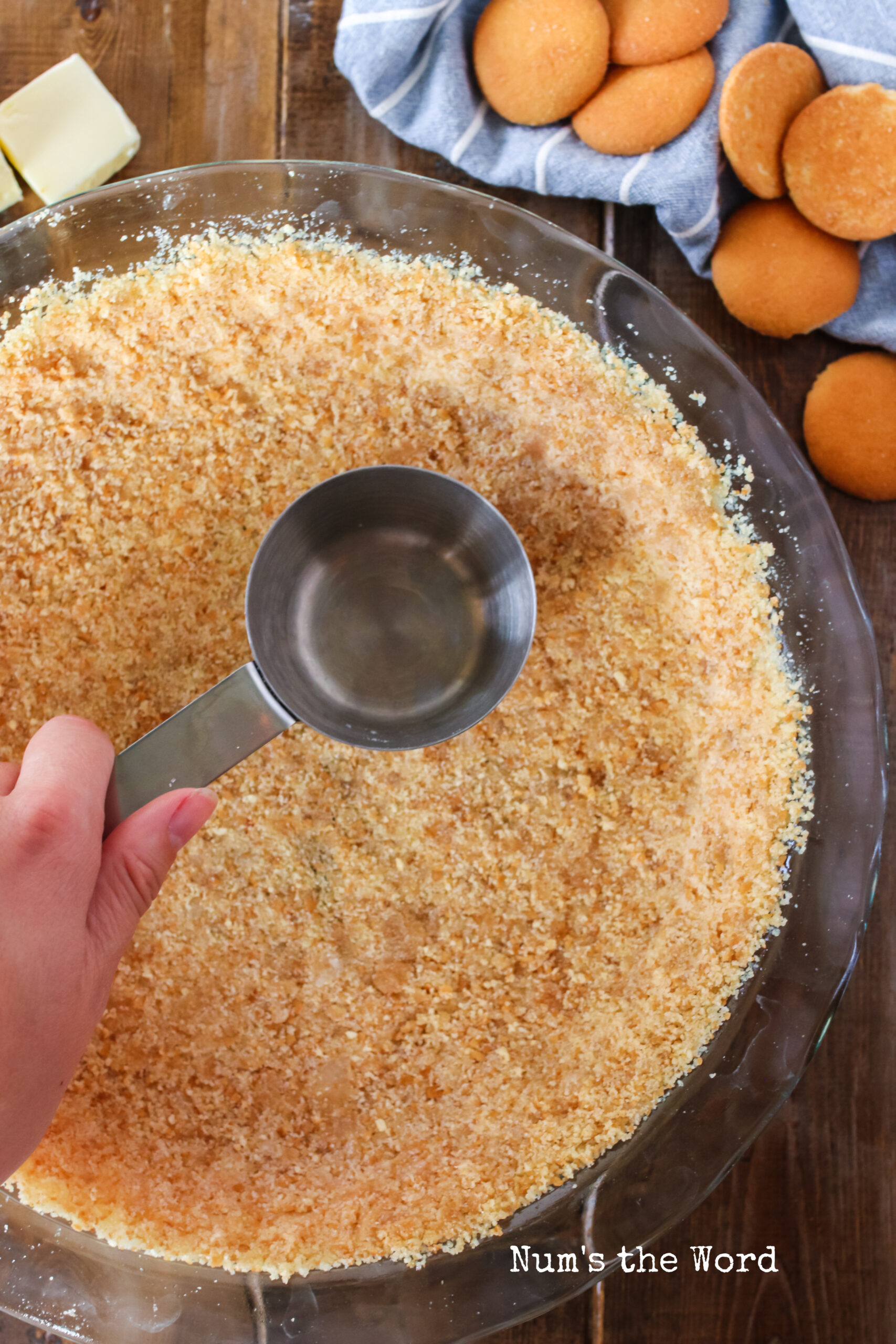 Can I use any brand of vanilla wafers?

Yes! “Nilla Wafers” is the brand name of the Nabisco variety, but there are a bunch of store brands that may be less expensive and work just as well.

Sometimes you can find readymade vanilla wafer pie crusts in your local grocery store, though for me it’s been hit or miss.

I totally recommend making it on your own because 1) have you seen how easy this recipe is?! And 2) you can make a bigger pie! The ones in the store are only for 6 oz pies, which are pretty tiny, if you ask me. 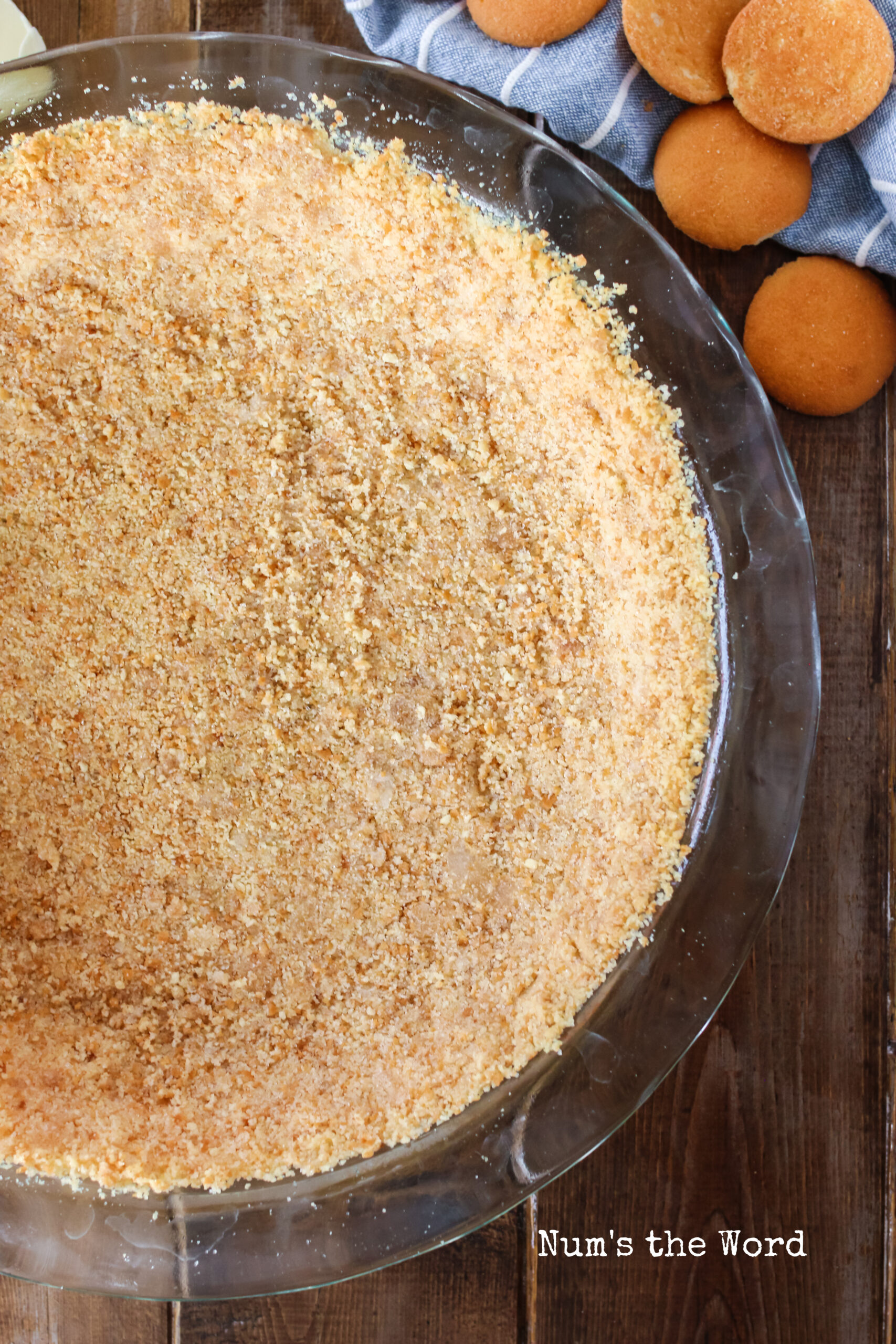 What to do with leftover vanilla wafers?

While nilla wafers make a great snack on their own, we LOVE nilla wafers in all things banana flavored. Check out the following recipes for leftover nilla wafer inspiration: 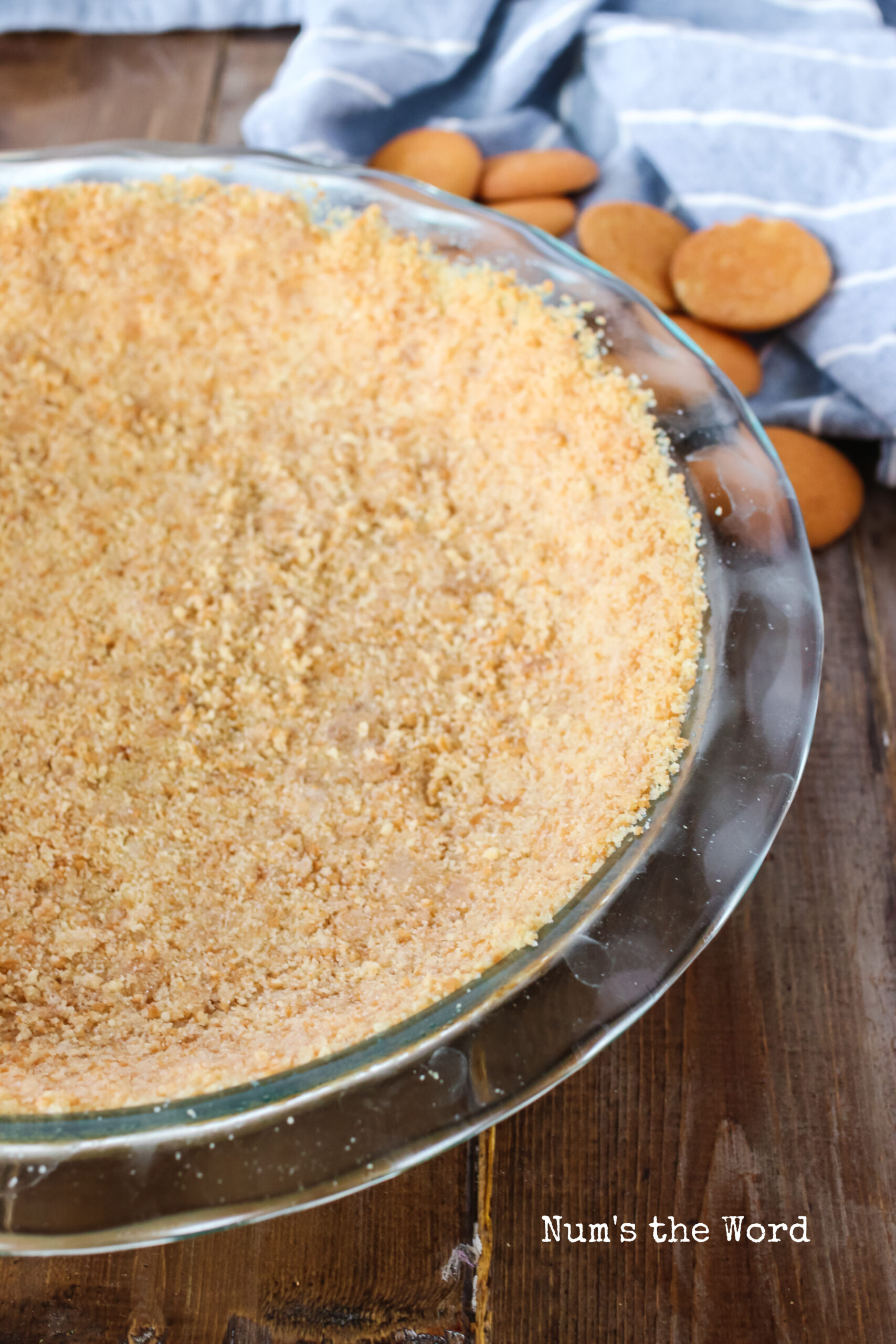 I’m sure you’ll love this Vanilla Wafer Pie Crust as the foundation for whatever delicious pie or treat you’re making! I know all my friends and family have loved it, and I’m sure yours will too. Happy baking and enjoy!